Back in Touch with Flamingo Pink

Last week I did something I've done before, but never with the same expensive consequence. We've all done it, right? Okay, probably not all. Only the multitasking, clever moms out there? I left Costco and before strapping Peter into his carseat, placed my phone on the roof of our car. About one quarter mile out of the parking lot, I thought the person behind me honked at me, but I brushed it off and kept driving. A little less than halfway home, driving 65 miles per hour down the highway, it hit me: my phone! I looked at my Apple watch. Sure enough, out of range. We pulled over a mile later (as soon as we safely could) and I looked on top of my car. Wishful thinking, I know. No such luck. We retraced our path and went back into Costco, just in case. I asked a friendly stranger if I could text Nate. Using his phone he could see my phone on the side of the highway! So maybe it was still working?

My loving husband left work and went to search. Apparently Find Friends is not so accurate, plus I described the debacle poorly, so he spent a fair amount of time driving on the opposite side of the highway from the phone. Sorry Nate.

Later on, the phone was not showing up as active, so our hearts sank a bit. Most expensive mistake I've made, but on the other hand, it could be way worse. I admit I said some prayers. Louisa laughed a bit, I think knowing that God cares, but maybe that he was busy answering more important requests. Long story (a bit) shorter, we found parts of it smashed on the side of the highway, maybe 100 feet from where it originally showed up on Find Friends. Without the bright pink case, our search would have been in vain. 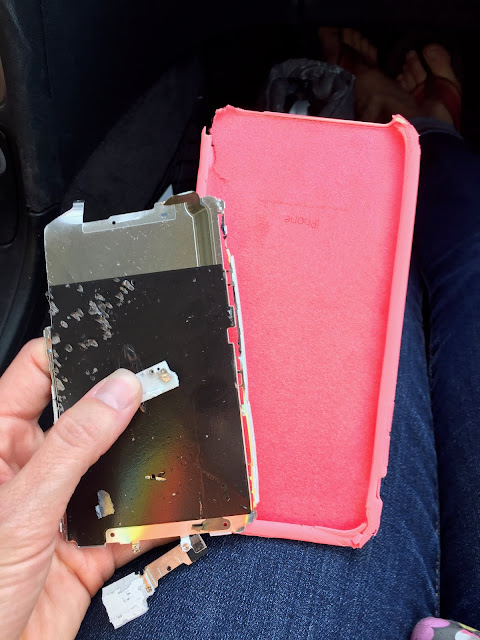 I know it's still $700 more than we planned to spend this week, but I sort of feel I had an iPhone purchase coming, because I never actually paid for my two I've had in the past 5 years. Yes, that's right - I made 2 phones last 5 years! Okay, okay, I know it's still NOT COOL that I left my phone on top of my car.

My love for pink prevailed when ordering a new phone, and there were no pink iPhones in stock, so I was without a smart phone for 5 days. First world problem? Yes. Kind of nice to be out of touch for a bit? Yes. But I'm happy to report that I'm back in touch, with a smaller screen and flamingo pink case.
Posted by Alicia Bosscher at 10:23 PM