Three or four weeks ago, a 4-man crew started our siding. They thought it would take 3 weeks, but fell a bit behind when the foreman lost his father to an illness he's battled for many years. We're totally happy with the quality of work and his work ethic and he only needs a couple more days to finish up! After that, my lawn and garden will be a blank canvas and I'm excited to pretty it up by growing new grass, planting perennials and building rock walls.

You'll notice the decorative pieces on the columns are not quite right. That's because after securing them with screws and caulk, the city inspector came by and told Nate he needed to use hurricane straps to secure them the porch floor and roof. The good news is that they are now secure and the inspector is satisfied. The bad news? Just that we have to scrape off old caulk and re-caulk. Could be worse, I guess!

All in all, the house is great! I found our real camera in the attic today, gave it a new battery, and snapped a few pictures to share with you here.


Posted by Alicia Bosscher at 9:50 PM No comments:

I sat down on the couch with my laptop tonight to check out my options for a yoga class in the next day or two. Found one: tomorrow night at 7:45. My yoga goal for 2016 is to use up all my classes on my 20-class pack. Nate gave me the gift of yoga for Christmas last year: 20 classes to use before December 20, 2016 (I'm on # 7 or 8). This week before school starts, our calendar is surprisingly empty, so I want to fit in some classes while I can!

After looking at the yoga class schedule, I visited this blog. Noticing that I hadn't posted lately prompted me to check out my photo stream for ideas of what to post. Here is what I found, here is my inspiration: 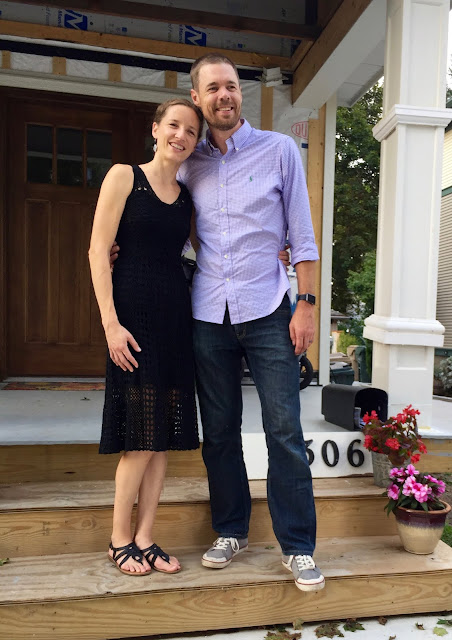 Nate and I celebrated our 9th wedding anniversary last week. The actual day, Thursday August 18, brought a frisbee league final game. We had two or three honey passes: our speciality. That night we went out with a group of dear friends from past and present. The restaurants - Gib's Bar and Grandpa's Pizzeria (both places I've been wanting to try) were awesome, but the company was even better. On Friday afternoon I biked 4 or 5 miles to a bed and breakfast northeast of Madison and Nate met me on his way home from work. We came back downtown Madison and had a lovely dinner at Sardine.

Although it was tempting to come home on Saturday and work on the house, we lingered at the farm-to-table breakfast before heading back downtown to walk the farmers' market, in search of sweet corn and mint for dinner and drinks Sunday night. We came home with corn, mint and eggplant. Yum.

The party didn't want to end, because after a nice productive Saturday afternoon and evening at home with the kids, Oma took them back on Sunday so we could go for our bike ride that got rained out Saturday. Twenty-two miles with the wind at our backs took us all the way to Trek.

As I was drafting behind Nate during our ride, I was reflecting on how lucky I am to have him. He has worked so hard to get this house to this point and he's taken back a share of the breakfast, dinner and bedtime duties that used to be mostly mine in California. I love biking with him because he's always totally aware of where we are. And he wrote me a thoughtful card for our anniversary.

After a year of remodeling that had the potential to weaken our relationship, I feel like we're actually closer, stronger. I love him. I love you, Nate.
Posted by Alicia Bosscher at 9:37 PM No comments:

That What I Said

Yesterday at work I took a test. It was a 40 question, multiple choice exam designed to assess my competency as clinical dietitian. Thankfully I passed, although I'm told that it really would have been okay had I not passed...i.e. I wouldn't have lost my job or been demoted. But anyway, I'm glad it's over and this morning at breakfast, a cute conversation occured:

Nate: Lou, did you hear that mom passed her test? She was really nervous about it, but she did it!
Lou: Oh.
Me: Don't worry, you don't need to know or worry about what a test is yet
Lou: I already know what a test is. It's when you try something out to see if it works
(I didn't follow for a few seconds, but Nate obviously did)
Nate: You're right, that is one kind of test, but soon you're going to take tests at school where they ask you a lot of questions to see if you learned everything you were supposed to learn.

And then there is another conversation I've been meaning to record, this one highlighting my recently developed caffeine dependence:

And last, a second Cora coversation that made us laugh. We were all in the car driving to Menard's together and passed cemetary:

Cora: Hey, that where you die!
Nate: Yeah, that's where they take you after you die to bury your body.
Cora: That what I said.

We can't wait for Peter to join the chorus of "the funny things kids say." These days, it's a little bit of "doggie" "sit" and "ball" and a lot of "dah" and "tsat."

Posted by Alicia Bosscher at 2:56 PM No comments: