I remember one of my last posts before Louisa was born: I commented that my urge to nest was no indication that my sweet baby was coming soon, because I'd been nesting since I was born. When I wrote that in April 2011, I was 37.5 weeks. Today I'm 38.5 weeks and I feel the same way. I still love to "nest" and I'm running out of things to do. It's true that I only have 2 lasagnas and 2 dozen pumpkin chocolate chip muffins in the freezer, but our freezer isn't actually that big. Oh, and this weekend, Nate added 10 calzones to the stash. I also added to my short list of things to do, including clearing out the files from office at DreamWorks. Sad news came Thursday night: they're closing their Redwood City location, where I've worked once each week since Cora was born.

Other preparation activities taken care of: Cora has officially moved into Louisa's room, although she still naps in her old crib for it's quietness and darkness. But at night they are sharing a room, which has created two giggly sisters. Closets are organized and the baby has tons of wonderful hand-me-down clothes from my sister, Sarah and friend Amanda, who both had two boys and feel fairly certain that two kids is plenty!


On Friday I took the girls to Marshall's so they each could pick a present for the new baby. Cora had an easy time picking a superhero monkey, but Louisa was much more contemplative. She picked a couple of pink dolls and I struggled with how to say that boys don't usually like pink dolls as much as girls do. In hindsight, maybe I shouldn't have cared? Next she picked pacifiers, which I said was a great idea, so she popped them in the cart and said but that's not a toy so I'll find a toy for him too. I explained that she only got to pick one gift for the baby, and it didn't have to be a toy. The pacifiers went back on the shelf and she considered a blue bunny blanket before putting that back and finally settling on the pacifiers. She definitely gets her indecisive shopping from me!

Today I bought little gifts for Peter to give to the girls and a "zero" candle so we can all have a little birthday celebration together at the hospital. Speaking of celebrations and preparations, Nate and I had a wonderful double date with our friends Brad and Karen on Friday night and then on Saturday night, my friend Tina hosted a "pre-baby girls' night" for me. There were six of us and it just so happened that five were pregnant. The only non-pregnant one was gracious in letting us talk about pregnancy and birth before and after watching and laughing at a pregnancy-centered romantic comedy, Away We Go.

We're ready for you, littlest one!


Posted by Alicia Bosscher at 12:54 AM No comments:

My pregnancy app, The Bump, encourages me to take weekly belly photos. On Tuesday, number 37 is due and guess how many I have in my gallery? Two. Whoops. So in hopes of keeping some memories from this pregnancy, here are some things people, mostly strangers of course, have said to me over the past month:

I'll blame the camera function in the app for this low-quality photo, because that big pink phone is supposed to have a great camera, right Nate?! 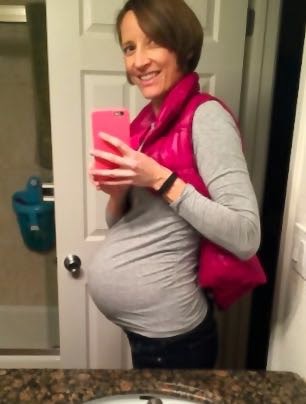 We're back in Campbell after a wonderful 2-week trip to Wisconsin, Michigan and Washington DC! There were many highlights, but a few things we're especially thankful for include:

***Warning: the following paragraph may sound a little whiny, so feel free to skip it***

We rental a car from December 21st through the 29th, which worked great to shuttle us from Milwaukee to Madison to Oconomowoc to Grand Rapids to Chicago. It's somewhat ironic that our only travel woe happened with a different rental car that we picked up in San Francisco on January 3, the day we arrived back in California. After weighing the costs and hassles of the various ways to get from our house in Campbell to the airport (or vise-versa), we've found that a 24-hour rental is usually the cheapest and most convenient. Unfortunately, this time, we were given a car with a bad tire. Five miles south of the airport, it went flat. Of course my handy husband can deal with a flat tire under normal circumstances, but this time the lug nut had been stripped and the wrench was poorly made, so he wasn't able to remove the flat. We called roadside assistance who initially said they would send AAA to swap the tire and have us drive back to SFO and get a new car. Good thing Nate was the one talking to the representative, because I probably would have become hysterical at the mention of driving back to the airport to trade in the car. He calmly explained that he would rather drive 50 mph for the remaining 45 minutes of our trip home than have to switch cars, which meant reinstalling carseats and reloading luggage. So then we sat on the side of highway 101 for 2 hours waiting for AAA. iPads and iPhones were handed out freely after food was used to bribe, reward and distract. Louisa successfully peed on the side of the highway and Cora managed to sit somewhat peacefully in her carseat the whole time.

Of course this experience made us extra thankful that we had landed in California at 11:30 am on a Saturday. I felt calmer during the whole ordeal because we weren't sitting on the side of the highway in the dark and I knew that we had Sunday to recover before jumping back into real life.

Real life did return this morning, but it's been gentle on us. Louisa was excited to go back to school and while I wouldn't wish a horrible head cold on Nate, it did allow me to leave Cora at home with him while I drove to Santa Cruz for a midwife appointment. I even got to stop at the gym and walk on the treadmill while listening to This American Life...something I wouldn't have done with Cora since she also has a bit of a nose-dripping cold.

The baby seems to be doing well, although I wasn't surprised to hear that the midwife was concerned about his growth based on my baby-bump measurement. Over two weeks ago, at 33 weeks, I measured 33 centimeters, but today, at nearly 36 weeks, I measured 32 centimeters. To the ultrasound room I went! Thankfully this happened with Louisa and Cora at 35-36 weeks as well, so I've learned to stay calm and not google "growth concerns" or "low amniotic fluid."

I was sent home with instructions to drink more fluids without caffeine and less than two hours after the ultrasound was complete, I received an email that said everything was fine although his limb measurements are lagging and he could be 4 days late based on his growth. A late arrival will not surprise me, but short limbs? That would be a new one for our family.

To close, a few of my favorite photos from our midwest & east coast adventure:

Posted by Alicia Bosscher at 5:26 PM No comments: