Last year Louisa "dressed up" as a ladybug (thanks, TJMaxx), but it was more of a warm, cute outfit and less of a costume, and she didn't go trick-or-treating.  This year, with a little time on my hands, I decided to make a costume. My trip back to Wisconsin had excellent timing, because 8-days pre-Halloween, I realized the pattern was more complicated than I thought.  Marcia, Nate's mom, was a HUGE help interpreting directions for the chef's hat and sewing the collar and cuffs on the jacket. Thanks to her enthusiasm and sewing skills, the costume was ready for yesterday's big events!

We met Nate's cousin's wife in Los Altos for "downtown trick-or-treat" in the afternoon before meeting up with friends - Heather, Shawn, Jacob and Charlotte - for pizza, salad and nighttime trick-or-treating. Who knew that people give king-sized candy bars to toddlers?! Nate and I were grateful. Louisa caught on very quickly, eagerly marching up to doors, knocking on the door (with a flat palm) and reaching in candy bowls like it was her job. Thankfully Jacob was along to say the obligatory, "trick-or-treat" and "thank you." Fun day!


Meanwhile, back at our house, I was conducting a grand experiment. I had thought about buying candy, but felt too cheap when I actually had the opportunity. Besides, I knew we wouldn't be home and hated the thought of greedy teenagers taking the whole bowl. After getting a little bit of gut rot after Lou's afternoon treat collecting, I decided to offer something healthy (and free) to the ghosts and goblins in our neighborhood. Another reason for my late opt-in was the guilt I was feeling this week leading up to Halloween. Most of our neighbors had elaborate decorations and the thought of being that dark, scrooge-like house was not appealing.  SO, I took a ladder out to our bountiful apple treses, carved a pumpkin with Nate's power-drill and made a quick sign to encourage people to take the apples.  LO AND BEHOLD...all of the apples were gone when we got home at 8:45! Success. My dad thinks all the parents made the kids take an apple each, but I like to think that people wanted something to balance out all that sugar :) 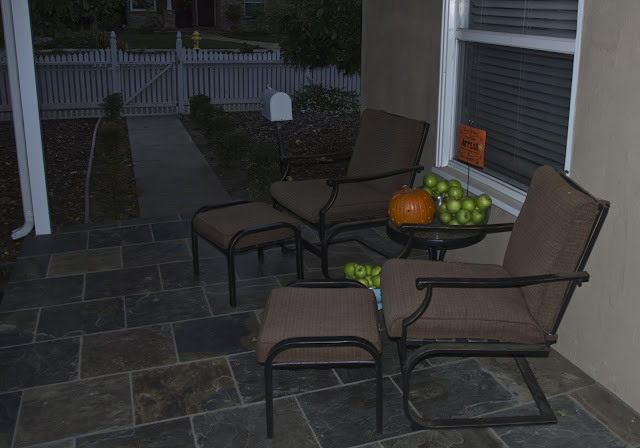 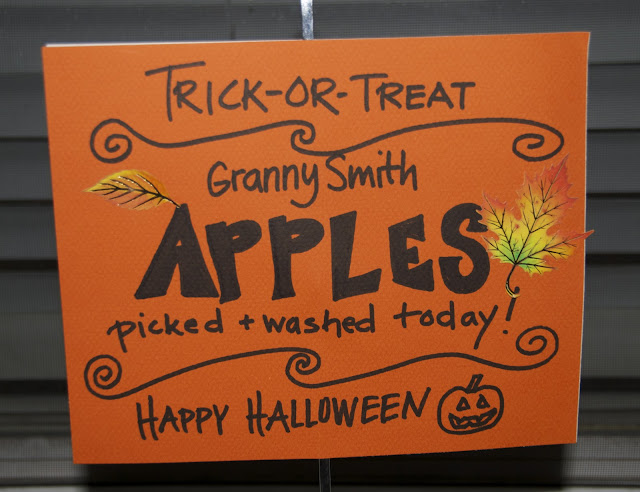 Louisa has been really pleasant lately...sleeping 12 hours at night and napping 2 hours during the day.  She's eating almost everything we put in front of her and laughing a lot.  That makes me happy to be a stay-at-home mom. Here's a video from today. She makes me laugh.

And here's one from earlier this week. Ries finally got a bath after last weekend's camping trip, so she was ready for prime time.

Love to you all,
Alicia (and Lou and Nate and Ries)
Posted by Alicia Bosscher at 10:26 PM 1 comment:

I've always been into setting goals. Of course we all set goals at different times in our lives whether we label it a goal or not: finish the semester, find a new job, run a marathon, learn to like tomatoes...

Those are important, but my current goals are not nearly as grand. I just want to do a few simple things that I KNOW make me better. The nice thing about my goals is that while they will require discipline, they won't take up that much time. Although, just writing that made me say to myself, "you do have quite a bit of free time right now." Regardless, I've learned that it's important to set easy goals that you are somewhat passionate about, otherwise you'll get overwhelmed or lose interest.

So what are my goals? Goal number one: yoga at home at least twice per week. I use yoga download.com and recently have been trying to get back into their prenatal offerings. When I was pregnant with Louisa, Abbie and I were pretty consistent about going to prenatal yoga classes on Monday nights. Stretching my body while remembering to breath feels soooooo good, especially when pregnant.

Goal number two: pray more. Ideally I would have a whole devotional routine each day, but again, I want to start easy and get into a habit, so dedicated time for prayer - even for five minutes each day - is where I'm at. God is good and I need to acknowledge that more often. Guidance on my job situation would also be very welcome.

Goal number three: floss more. I hate flossing, especially the teeth that have a permanent retainer, but every time I go to the dentist (every six months!) I feel guilty. Plus, it's healthy and I'm into health.

Louisa's only goal these days is to rock the hipster look. 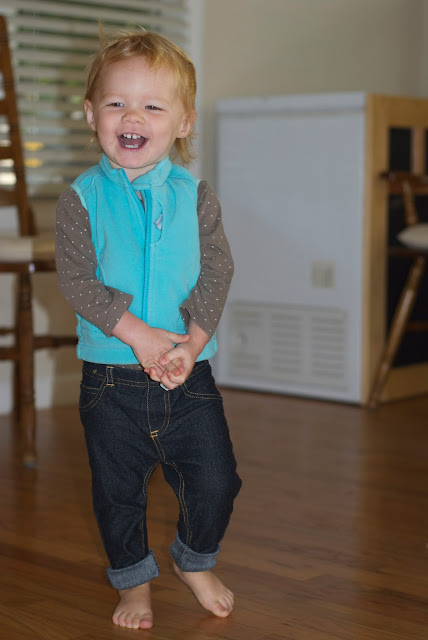 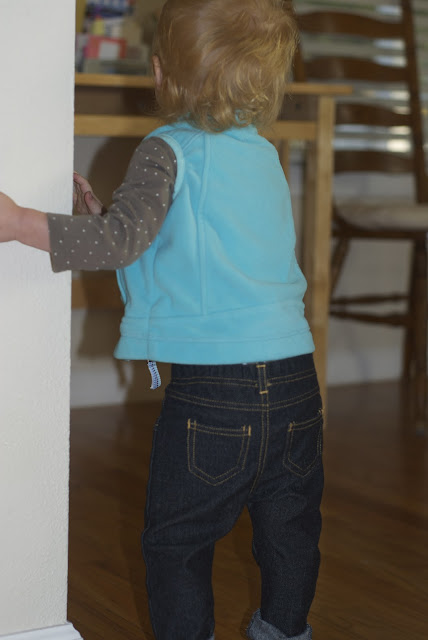 Before we moved to California in June, my parents and grandparents had planned a 2-week vacation in Hawai'i.  Once we had made the decision to move our lives to Silicon Valley, I joked that if I wasn't working by September, Lou and I would come to Hawai'i for a visit.  Well, Nate was able to take time off, so we took off for a Hawaiian adventure - our first time to the BIG ISLAND - Friday through Tuesday.

We stayed in Kona and had a wonderful, relaxing time.  Louisa instantly re-bonded with her Belle Mere (my mom) which was no surprise.  The awesome surprise was the love that developed for my dad, her Papa.  They walked outside after dinner to find the moon and played silly games together.  Such a nice break for me!  She also holds a special place in her heart for my grandma, who taught her how to "throw kisses" this summer.

On Saturday I was showered with attention, as if I was going to have a hard time leaving my twenties behind.  We went on a short but steep hike to Pololu Valley Beach.  Our guide book described it this way: The beach itself is a nice wide expanse of fine black sand surrounded by sheer green cliffs and backed by high dunes dotted with pine trees. Yes, I agree. It was gorgeous.

After a nice lunch at Bamboo in Hawi, we headed back to Kona on a highway lined by black lava fields where visitors often stop with white rocks to design messages.  We didn't have any white rocks and I felt guilty using Nate's suggestion of rearranging someone else's message into our own, so we just drove on by.

Sunday morning we rented snorkles and saw some beautiful fish and one terrifying eel at Kahaluu Beach Park. My mom and grandparents stayed with a napping Loubear on the beach while I snorkled with Nate...yet another attempt to get over my silly fear of fish. I would say I was at my bravest that day.  Sunday afternoon we took a tour of the Kona Brewing Company and sadly learned that all of their bottled beer we had drank was brewed and bottled in Oregon. Apparently they just keg beer at the actual Kona Brewing Company.  That wasn't nearly enough for me to finally agree to let Nate start kegging his beer. 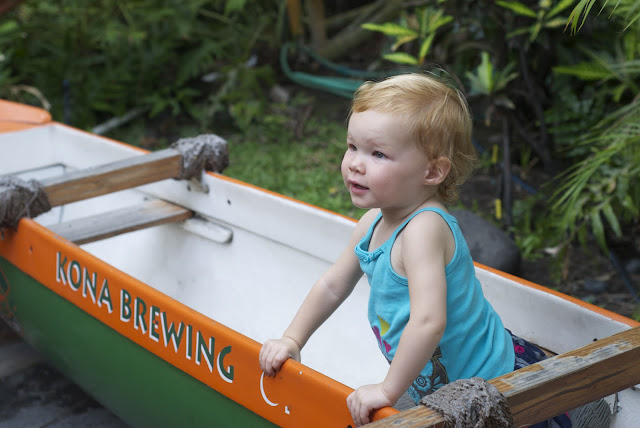 Monday, our last full day on the island, started off with a visit to Magic Sands beach, where we hoped to let Lou ride around on a boogie board.  Unfortunately the waves were surf-able, so too big for Louisa.  Instead, Nate dove around in the waves while Lou dipped her toes in.

We re-grouped at the resort before heading to the south-east portion of the island for a visit to Hawaii Volcanoes National Park. Unfortunately there was no active flow during our visit, but it was still very cool to see the crater and the steam vents. 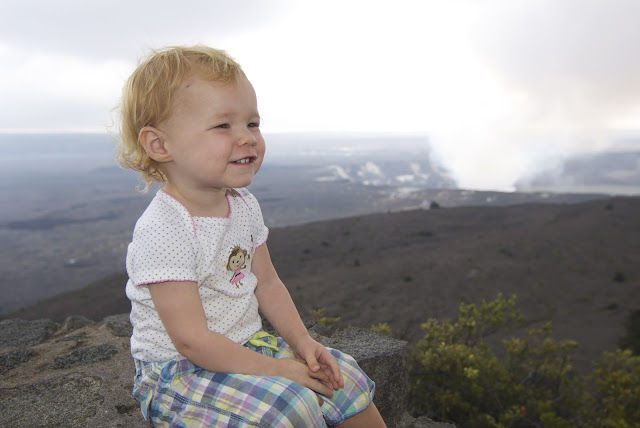