A few things to share before they slip away to thoughts of what did she say that one time about frogs and Jesus and watching sporting events on the iPad?

This is also a good time to remind myself that I'm not only exposing Louisa and Cora to girly things. Some of you may have seen my FB post about the pirate festival. My comments got me thinking about what other not-specifically-girly things the girls are exposed to. So first-off, we raised a tadpole in our kitchen! He mostly made it to frog-hood, then died one month after we snatched him from his habitat at a birthday party. Maybe his diet of basil and mint leaves was too limited? After we covered him with dirt, Lou asked but mom, where will the frog play now? I told her that to die is like sleeping forever….that he won't need to play anymore.

Way to miss a chance to talk about heaven, Alicia!

(that was me, critiquing how I handled the situation. Lou doesn't call me Alicia)

Thankfully Lou redeemed it though and said that's okay, Jesus still loves the little frog. The timing of the frog burial was apparently perfect! We had just picked Lou up from vacation bible school, where the theme was even when you feel left out, Jesus loves you.

So there's frog rearing. We also watch plenty of sporting events, mostly ultimate frisbee, in-person and on TV. We've been to all of the home games at Foothill College, and even watched some of the away games on ESPN3. Anne and I were commenting on how our children are growing up thinking it's normal to watch aunts, uncles and fathers play ultimate frisbee on TV. How true! Louisa confirmed that this is normal by asking if we could watch Nate's Apple-league basketball game on the iPad. Funny.

Third, our backyard is a large, parched, dirt yard with only two wide steps going down from the porch to the patio and yard. I can't recall now, but I think Cora learned how to crawl down those two steps way before she learned to walk. Now she has free reign of the house with her big sister Lou, including the dirt yard, where they love to dig, collect rocks, and make various make-believe foods. Telling you that all of the digging tools are pink and purple doesn't help my case, but at least I'm not forcing them to stay clean all day, right? 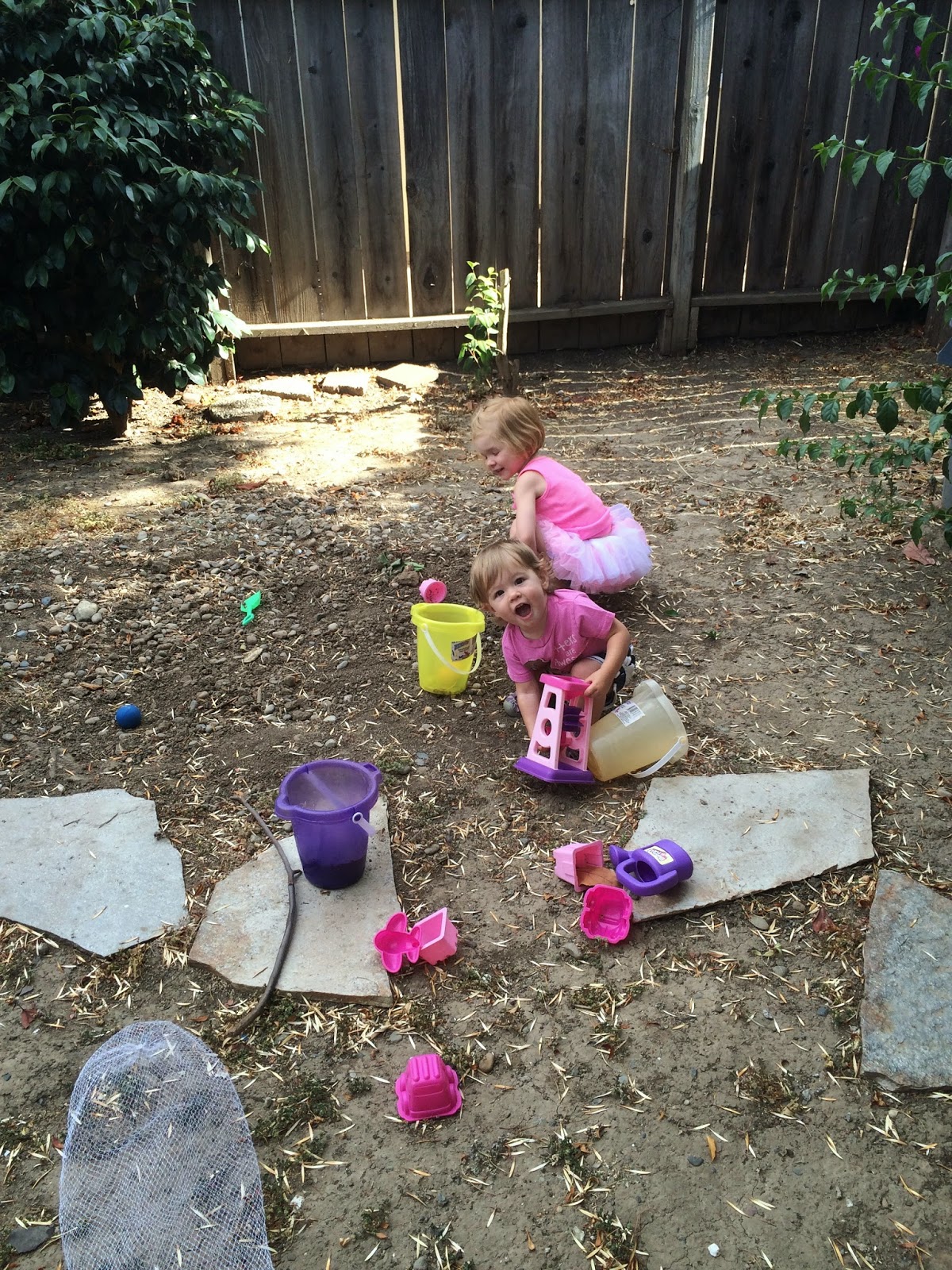 You can probably guess, but I'm interested in avoiding princess-obsession and I'm afraid I'm failing. Louisa has seen Frozen and would probably watch it daily if we let her. That was the beginning of loving princesses. Then our wonderful friends bought her a princess dress up kit, complete with three different dresses and matching accessories for each dress. Now Nate's been offering special movie nights once every couple of weeks, so she's seen Beauty and the Beast, The Little Mermaid and Aladdin. Her favorite princess to pretend to be is Belle. At least she loves books, started out as a poor peasant, and fell in love with someone ugly but kind (instead of Gaston, who Louisa says, isn't very nice). Instead of denying Louisa her princess fix, our strategy has been to remind her that princesses need to be useful too. They can be doctors! Chefs! Engineers! Speaking of engineers, here's the book on the top of my wish list. Ironically recommended by the friend who gave Lou the princess dress up kit. I guess I need to believe, truly believe, that princesses can also be smart, kind and useful too.
Posted by Alicia Bosscher at 12:37 AM 1 comment:

I was really encouraged by the comments-section-discussion that ensued after my blog post about raising eager eaters. One reader and friend even requested a follow-up post to let you all know how the MOPS talk went. So just under one month post-talk, here I am, with a report:

The format our meeting was similar to previous meetings in that we gathered, chatted and ate breakfast. This particular week was different though because we had to sign up for 3 breakout sessions. We call it our Wellness Day and it's fun because it's fast moving and you get to learn about 3 topics instead of just one. The challenge for me was to say everything I wanted to say in 15 minutes, 3 times in a row. Was I successful? No. But after 3 speed sessions, it seemed like the moms felt empowered to differentiate their role from their child's role.

The most encouraging bit of feedback I got was actually from a friend who didn't attend, but asked for the handout. After reading it, she emailed me this:


Hi Alicia! I am ordering Child of Mine and Secrets of Feeding a Healthy Family tonight. I am really feeling blessed by this new way of looking at food, eating and meals. My experience growing up was dysfunctional and (my husband's) was REALLY dysfunctional so this will be so helpful to us. I was not allowed ANY SWEETS growing up so.... my best friend's family ended up owning a country store and when I would sleep over we would sneak downstairs and steal candy! and when I was old enough to buy my own, I went to school everyday in Junior High and High School with a huge bag of Sour Patch Kids and ate them all day long... then at lunch I would bum money off of people and buy cookies and ice cream sandwiches. Now, as an adult, I buy candy constantly! All because of a deprived childhood. I am going to turn it around with my own family. My husband was forced to clear his entire plate or he would get beaten.... and if he didn't like the taste of the food, he ate it even FASTER so that it didn't get cold and even more disgusting... I always wondered why he wolfed down food that he said afterward was, "not that good." Anyways, I guess I wrote you a revealing book... I am just really excited about this new way of life. I am inspired.

Her email was so awesome in-part because it made it clear that I didn't come across as a deprivation-dietitian. During the talk, I made a point to encourage moms to serve dessert to their kids, with just two stipulations:
I definitely believe that dessert is an important part of raising a child that has a good relationship with food, and I wished we could have spent more time talking about the mechanics of dessert-giving at the talk, but alas...next year!

And just in case you need proof that Louisa and Cora enjoy their fair share of desserts, here's a series from our visit to The Buttery in Santa Cruz. They're sharing a chocolate dream cookie, chosen by Louisa from the gorgeous, sweet-filled case. I split, she picked…the larger half of course. 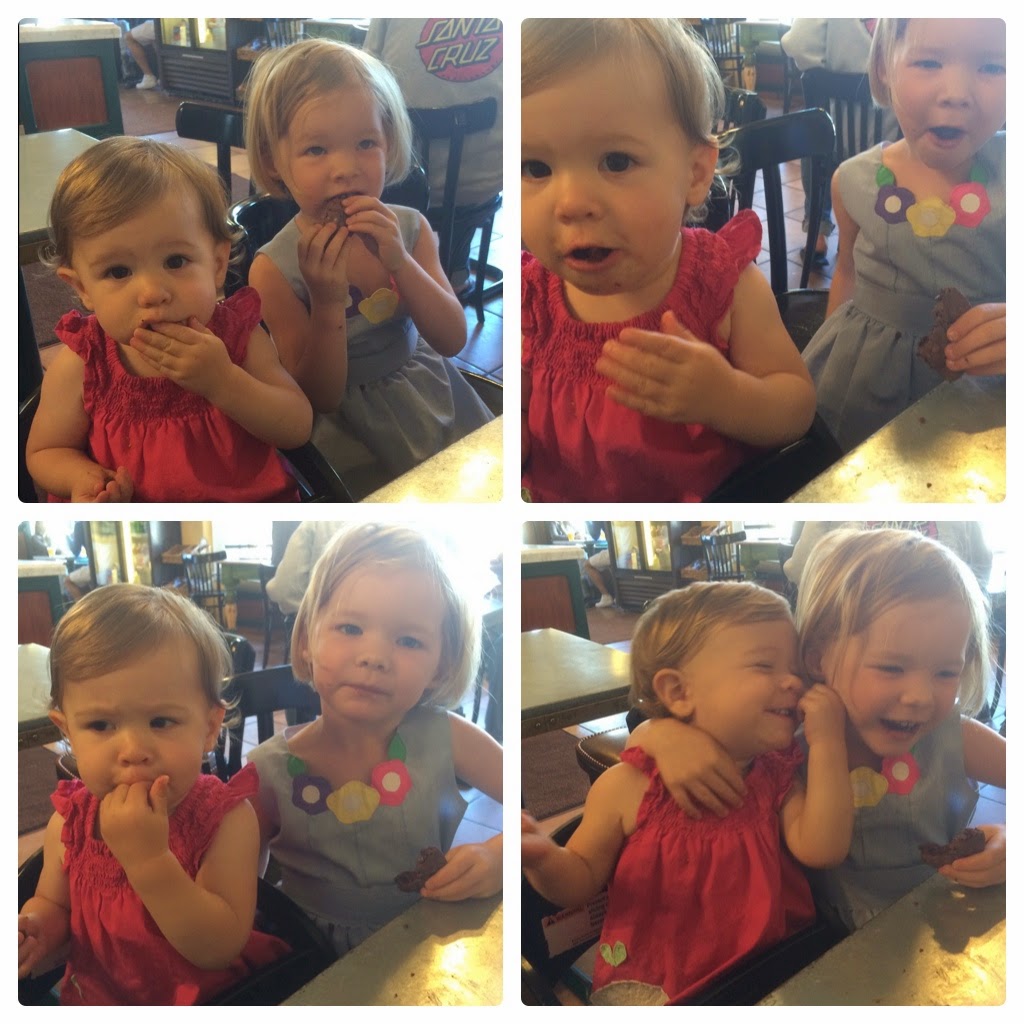 One last great thing about the talk that day at MOPS is that there was a woman in one of the sessions who attended a multi-day seminar on the topic of Division of Responsibility and had wonderful things to say about how the approach completely turned things around for her family. Very cool, not to mention super-helpful for me, assuming their were some skeptics in the audience.

Nutrition is so great. Through my various paid and volunteer nutrition jobs, I'm constantly feeling affirmed that I chose the right profession!
Posted by Alicia Bosscher at 5:15 PM No comments: