We recently took a great, girls-only trip back to Wisconsin. I didn't plan on haircuts, but both the girls ended up coming home with less hair than when we left California. I think for the better. No offense, Cora, but your hair, while surprisingly dark and in excess at birth, wasn't looking very good. So with a little electric clipper, I buzzed it. Not that she didn't already look like a baby, but I think she looks even more like a baby-baby now.

In contrast, Louisa's haircut makes her look older. She's also seeming older now that she's 70% potty trained. Thanks mostly to Oma and the great book that I mentioned before, we no longer have to worry about buying diapers or getting rash-y in cloth "dipes" (as we call them around here). Okay, yes, I still do have to worry about these things for Cora, but luckily she hasn't developed any rashes with cloth diapers, so I haven't yet been forced to place large, expensive diaper orders on Amazon. 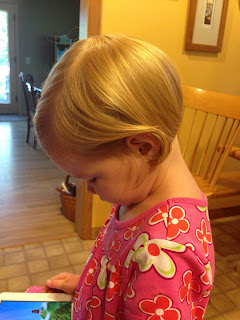 I'm calling Louisa's potty training 70% complete because of the poop part. Pee is easy. She knows when she has to go and can hold it (knocking on wood now). She even peed in a big potty at the airport and in the potty on the airplane. But pooping - HELP! For the first two weeks she just went in her panties in order to avoid the potty. Then she held it in for 2-3 days and finally on the third day started to complain that her tummy hurd and that she needed to fro up. I assured her that she would feel better as soon as she pushed it out, but she really didn't want to sit down and do it. Eventually she pooped on the floor. We celebrated because she instantly felt better and I instantly stopped worrying about impacted stool. I think the celebration was a mistake though, because today she definitely was looking forward to pooping on the floor and when she did, she celebrated, saying, daddy happy and yay, Towa! poop came out!  Oh my. Is this really want I want to be blogging about? To wrap things up, a video:

Posted by Alicia Bosscher at 12:41 AM No comments:

Our garden is not aesthetically awesome, but boy do we have some food growing. Louisa likes to pick things and declare that they are all done growing before she eats them. I wonder if she first learned that sentence a few months ago after I, very frustrated, pulled her away from the immature blueberries, telling her they were not done growing. I usually regret my moments of frustration with her a few moments after I act frustrated. On the bad days, I don't regret those moments until after Nate is home and the girls are both asleep. Kids are so innocent and sweet once they're asleep, you know?

But back to the growing grub. The blueberries are done growing. So are lots of the cucumbers. We've picked some eggplant, summer squash, jalapeños, bell peppers, heirloom tomatoes, granny smith apples and banana peppers already too. We're still waiting to see some baby watermelon or zucchini, but I'm thinking we may not. Meyer lemons in the backyard still have a few months to go and we're contemplating removing the non-producing orange tree in the back to make way for a grassy play space. This is definitely one of the perks of living in California!

Then there's Cora and Louisa, who are obviously not done growing. Both are growing up fast though! Louisa is apparently old enough to fly across the country without her parents, because she did it today. No, not by herself, but with her Oma. I drove them to the airport and Lou got a brief nap in on the way, waking up to me asking, "Lou, do you see where we are? It's time to fly with Oma" She opened her eyes and said, "Bye Ries," who was not in the car with us. I guess we can see who she's going to miss the most. It was no big deal saying by to Nate this morning, nor was it difficult for her to say goodbye to me today. Big girl! (another phrase that's been exclaimed a lot in our house this week, as Lou started serious potty training)

For those of you looking for a potty training book, I'd highly recommend this one. And don't think that if your child is only 3 months old that you're off the hook. The author recommends starting at 6 months. I know what you're thinking: hippy, crazy, dumb. But really, check out the book. I wish I would have read it when Louisa was a baby.