Compared to our time in Uganda, there is not nearly as much to write about or take pictures of now. But I am okay with that. Nate is too. Although we're off to D.C. this weekend and Nate's goal is to mess around with this fancy Nikon a bit more than usual.

Nate is still happily employed at NPoint. He now bikes to work (instead of walking) and for the most part, having only one car between the two of us is a piece of cake. I have been doing some very part-time nutrition counseling at AIDS Network, but other than that, finding a job has been way more difficult that I thought it would be. Despite this, the title of this post still holds true...I'm having fun teaching Ries new tricks, baking and cooking, and growing some herbs, tomatoes and peppers.

Speaking of Ries (because I can't help but do it all the time) yesterday she chewed her second non-toy - a cork coaster - while we were outside. After telling her "NO," Nate punished her further by making her wear the bear rug. She didn't even try to shake it off. 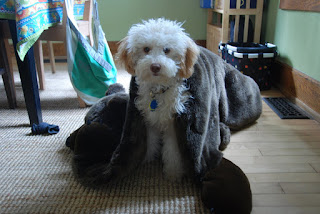 Even though she chews coasters, Ries has proven herself to be well behaved enough to come to our frisbee games. Nate and I are playing on a coed, competitive league team two days per week and its been great fun so far! Nate is also playing for the men's club team here in Madison - a hardcore team that travels to MI, CO, IN, and beyond for tournaments. I hope to travel with him to some of the exciting places, but if I end up home alone, I'll be out running, training for the Marine Corps Marathon which I'll run with Matthew, my younger brother, in October!
Posted by Alicia Bosscher at 12:08 PM No comments: