Last week Monday the girls went for their yearly check-ups. Well, for Louisa it was a yearly check-up, but for Cora, it was the culminating check-up in the long list of appointments a baby has in the first year: 1 week, 1 month, 2 months, 4 months, 6 months, 9 months and 12 months. Wow - listed out like that, it's quite an accomplishment!

Louisa loves the doctor. Not so much our specific doctor, although she likes her too, but more the greater doctor: as an outing, activity, place, group of people. Wren/Anne/Andrew sent a doctor kit for Lou's birthday, so imagine her excitement when the nurse explained that she was going to take Louisa's blood pressure. And you're going to check my temperature and pulse too?! This is the best day of my life.

(Okay, she didn't actually say that, but that had to be what she was thinking)

At three years old, you don't get shots. Surprisingly, Louisa was disappointed. I wished she could bear some of Cora's load...the poor dear had to get five. She definitely cried and displayed her strength as she stiffened up in my arms with each poke. As I recall, Louisa didn't get many shots between 15 and 36 months, so hopefully that's it for awhile? Maybe I'm wrong though, because this chart seems to show more. Someday maybe I'll read more about alternative vaccine schedules, but for now, I'm sticking with the standard schedule. Sorry Cora!

All in all, they are healthy and tall! Here are a couple pictures from our visit, posted here so Lou can relive the whole thing next time she needs a doctor fix.

Posted by Alicia Bosscher at 12:06 AM No comments:

We look forward to m(eating) you, tomatoes!

We planted our veggie garden last week! It's so hard to believe that these little tomato plants are going to (hopefully) go bonkers later this summer. Cora enjoyed the afternoon the most.

Be my garden journal for a sec: On Tuesday, May 6, we planted: tomatoes (cherry and heirloom varieties), butternut squash, white eggplant, purple eggplant, banana peppers, bell peppers, jalapeño peppers, sage and parsley. The pole beans were planted earlier because my neighbor warned that it might already be too late. Cross your fingers that we don't start to feel too guilty about the drought and stop watering our plants!

Posted by Alicia Bosscher at 3:12 PM No comments:

Alright, so I know I'm the RD here, but I need your expert opinion. You role: mother (or father) of a child that eats food. I'm giving a talk and I want to make sure it's helpful…

I've mention Karen Le Billon in a previous post. She wrote French Kids Eat Everything, but her newest book is called Getting to Yum, The 7 Secrets of Raising Eager Eaters. I haven't read this book, but the term "eager eaters" came to mind last week as I started to prepare a talk I'm giving at MOPS on Wednesday. The topic is picky eaters, but that has such a negative tone. Not every mom would say she needs help with a picky eater; but on the contrary, every mom wants to raise an eager eater! A side-note: MOPS moms have kids ages 0-5 years.

So I'm posting my handout here, asking for your feedback. The talk is brief - I only have 15 minutes - but I really want to give the moms some solid tips. Is it too much information to cover? Will people feel judged/intimidated? Your feedback can also come in form of personal stories that I could use to make the tips come alive! 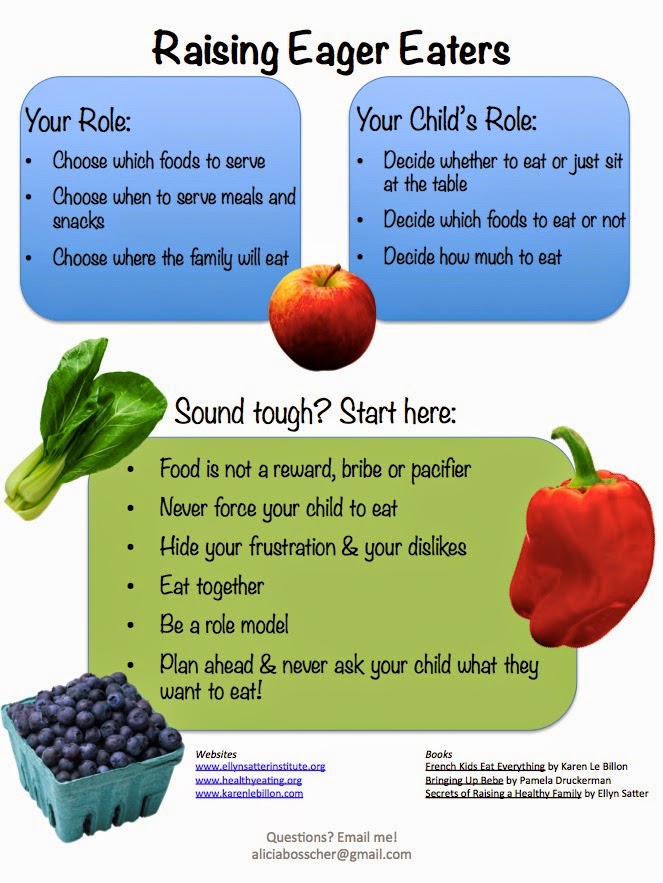 Louisa's birthday party went off without a hitch! We took a risk and invited 13 sweet children to our house for games, lunch and dessert. Only 9 could make it. The risky part was encouraging their parents to leave. We love family parties too, but I wasn't quite up for the "event" it would have been with so many guests. Plus, we hoped our friends would welcome a little adult time.

The bug theme came together nicely 3 days prior to the party when I went on Amazon to buy ones of those big parachutes with handles. The bugs, lizards and snakes by Melissa & Doug were too cute, so I rounded out the party bags and activities with bug nets ($1 bin at Target!), insect tattoos and little bags of gummy worms. If I would've allowed Louisa to pick the theme, I'm sure it would have been a princess party, or more specifically, Frozen or Beauty and the Beast, so I left her out of that part of the planning process. Not that I have anything against princesses (well, actually, I might) but they should at least be DreamWorks princesses, right?

The photos of my peanut butter pie didn't turn out; bad lighting...poor focusing, but it tasted pretty good. My only critique was that it was too cheesecake-y. Louisa acted thankful, but I knew how she really felt when she caught me eating a piece for a snack the next day. She walked out, blurry-eyed from her nap, and said, Mom, why are you eating some pie? I told her it was my snack and asked her if she wanted a piece. No, she said, maybe tomorrow.  That was the first time I've seen this girl say no to a sweet! Nate thinks it was the peanuts on top. Nuts and cantaloupe: these are the only two foods that Louisa is very certain she doesn't like.

**Update: I just found a priceless photo that includes the peanut butter pie. And it goes to show: you can still celebrate your birthday with grandparents across the country. We re-lit the candles after this and called my parents, too! 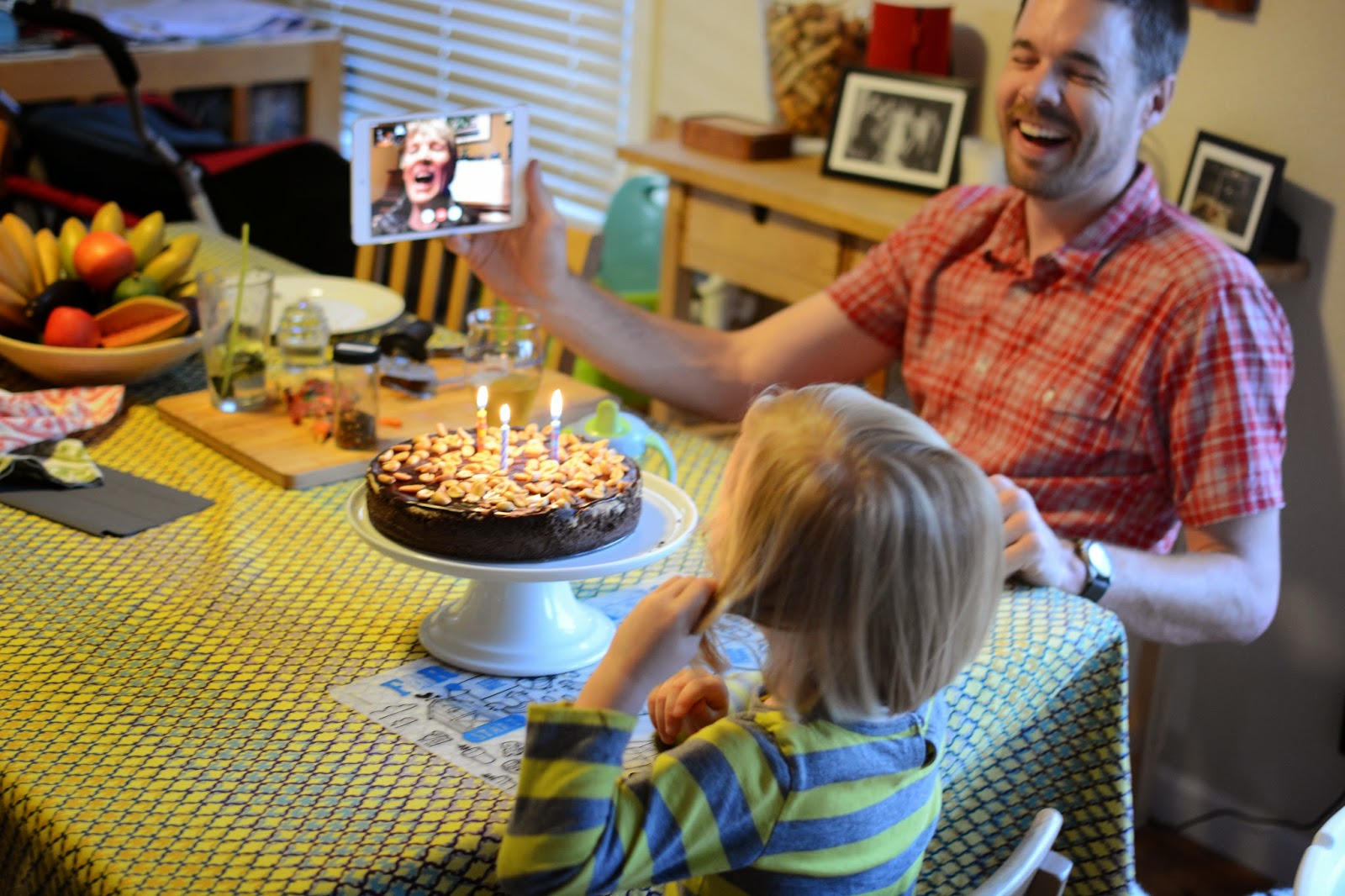 Here are a few images from Louisa's friend party. As you can see, we tried to do a mock-Lunchable lunch for the kids. I think it went over well. We certainly didn't end up throwing away as much food as you see on their plates in this first picture.

It was very fun! And I can confidently say that three years old is not too young to have a kids-only birthday party. We are thankful that our friend Jacob stayed though. An extra set of adult hands did come in handy more than once.

Whew! We survived the girls' birthdays. Now to come up with a fun theme for Nate's big 34th... 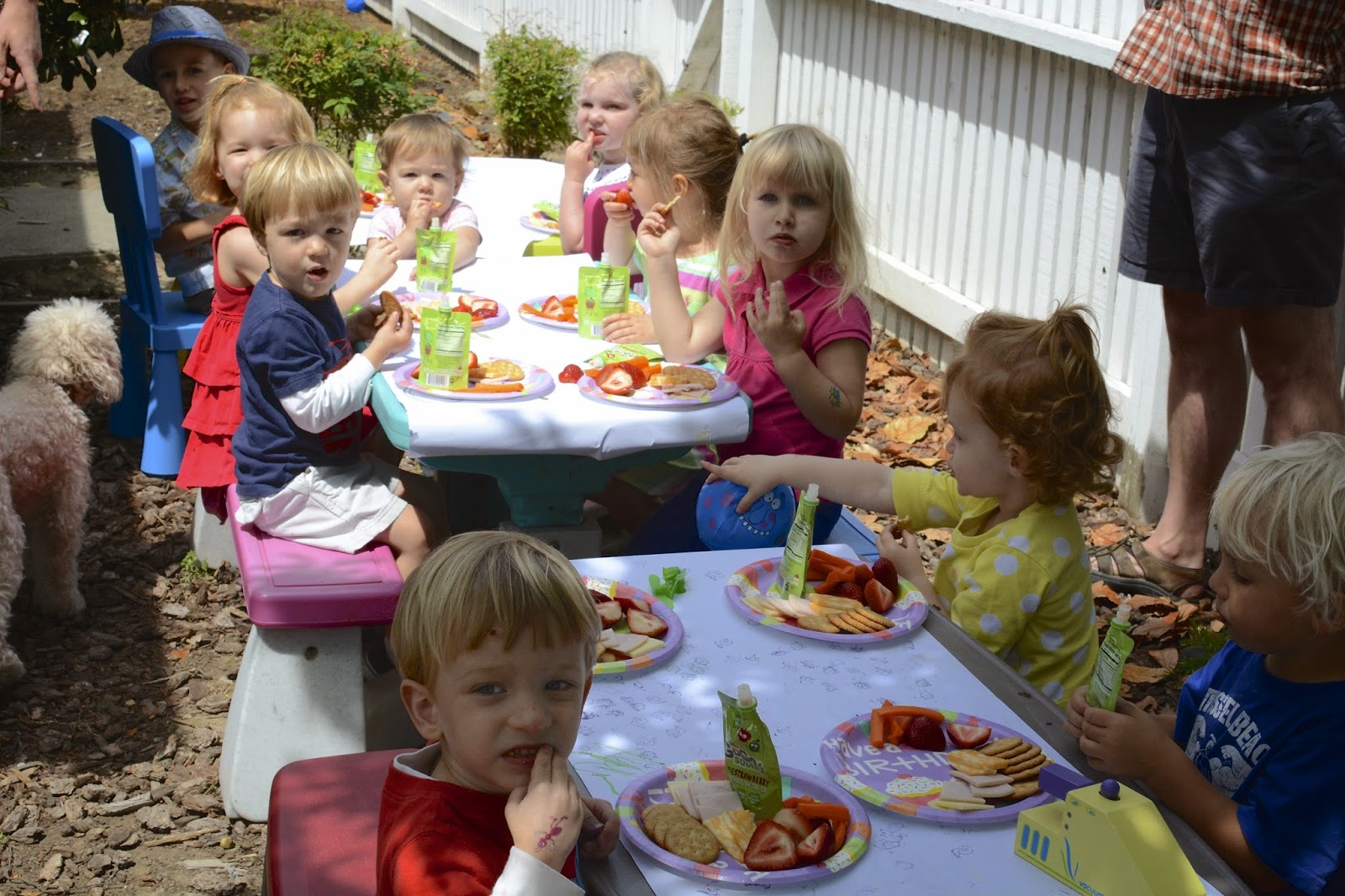 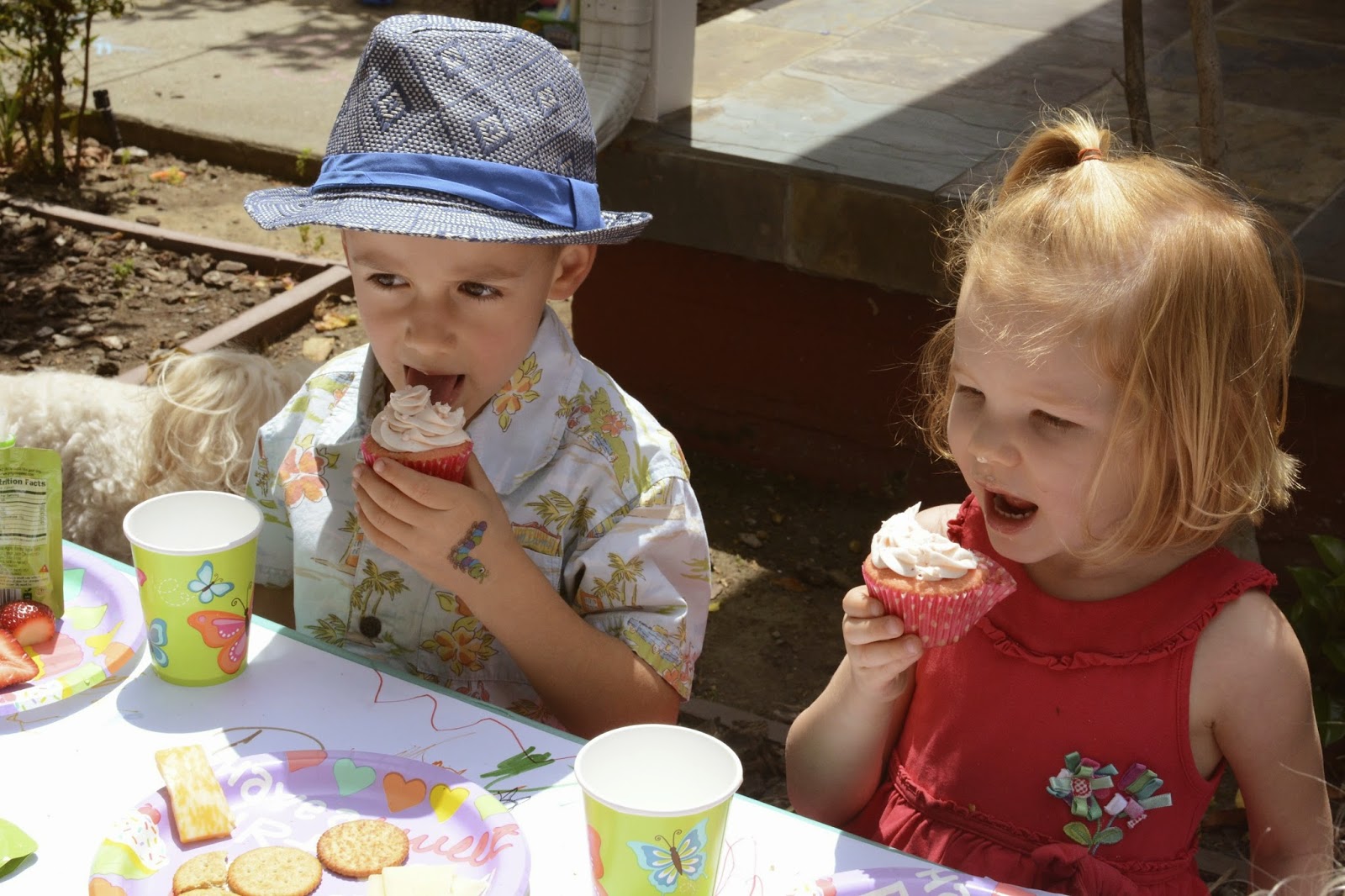 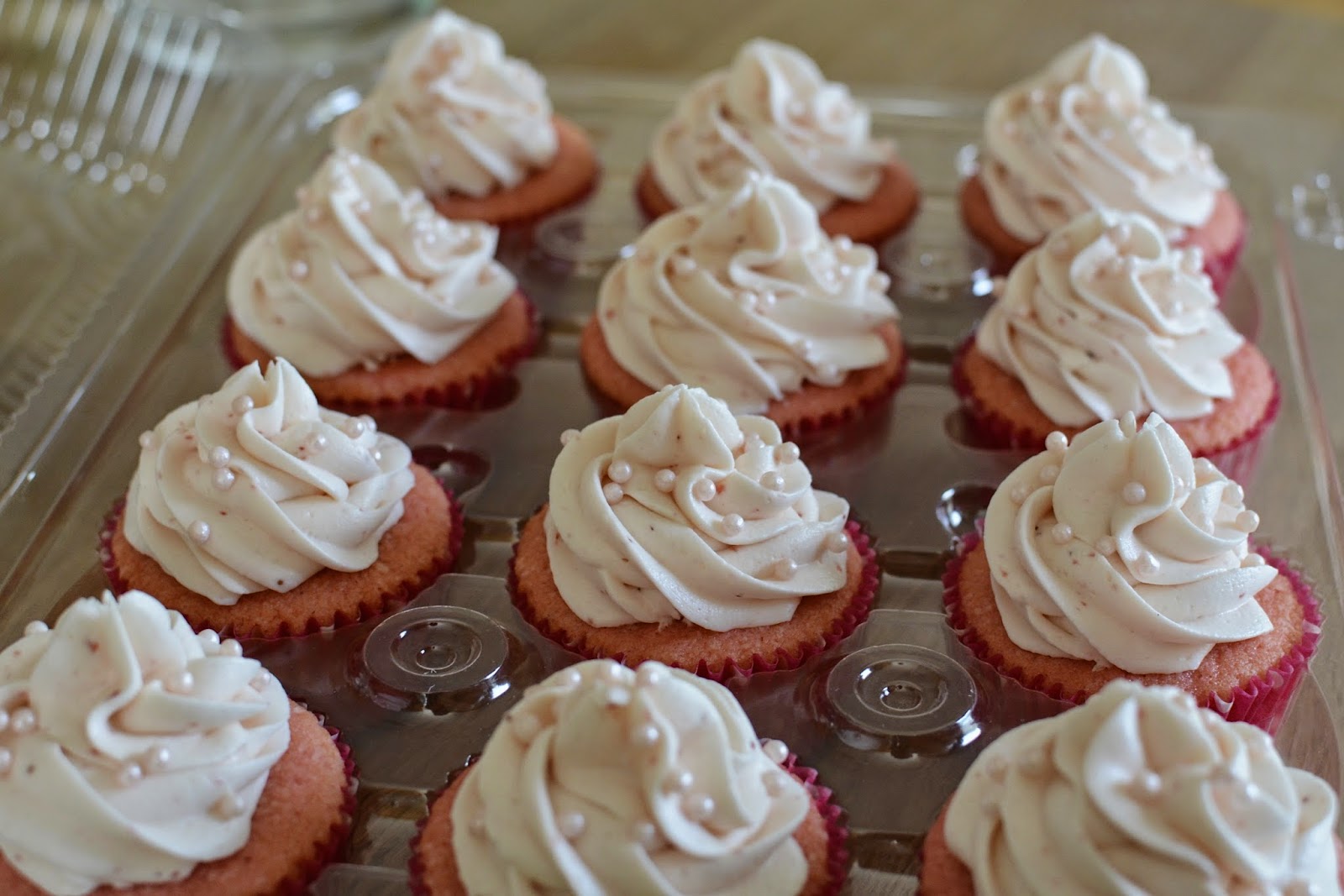 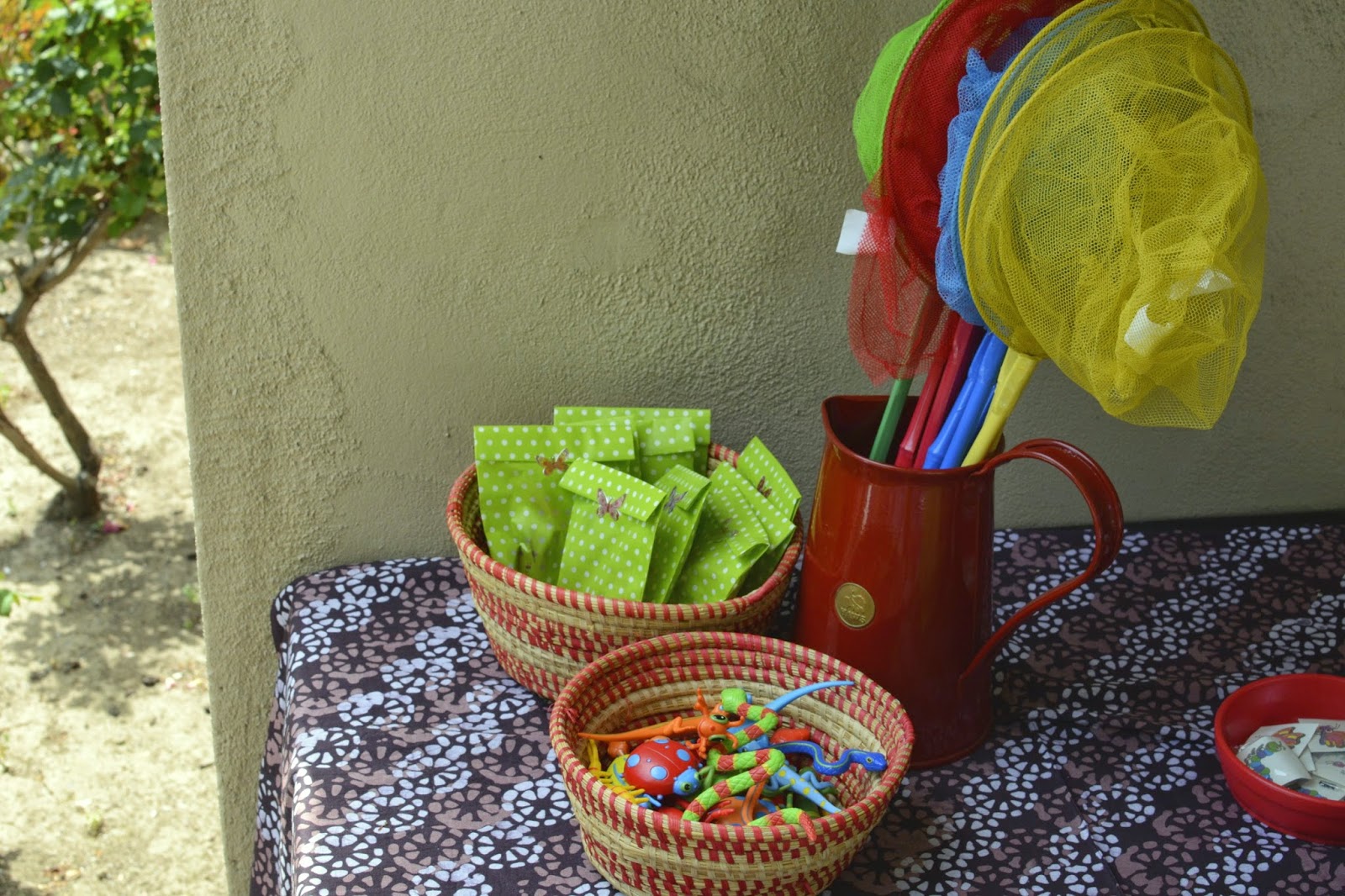 Posted by Alicia Bosscher at 4:37 PM No comments: