Demo Days are (nearly) over

Today was a big day on Center Avenue. The dumpster was filled for the sixth time and demolition is mostly complete. There are some silly storage platforms in the attic and a chimney that still need to come down, but other than that, we're entering the rebuilding stage. Next up: shore up the main floor by replacing footings and support columns in the basement. Nate has hired a house-moving-company to temporarily hold things up while our concrete contractor pours the new footings. Shortly after, drain tile will be laid around the perimeter of the basement and the foundation/basement walls will be smoothed and beautified.

The windows will be ordered by the end of the week and we also need to pick an insulation contractor. We still haven't made a decision on siding, but we're leaning towards major restoration of the current cedar siding. Whatever the siding material, we're thinking a grey exterior with white trim. Something like this photo from Apartment Therapy, but with a stained wood door instead of orange. Although I kind of like the thought of a fun front door - orange, yellow or green? 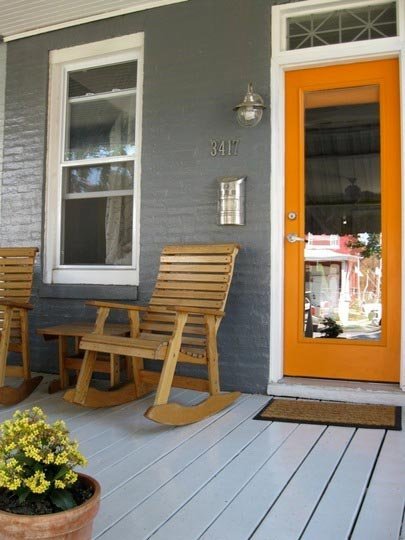 Another tour of our progress!

Posted by Alicia Bosscher at 10:15 PM