You may recall my recent interaction with a glorious morning bun at Starbucks. Well, soon after, I said to Nate, "we should really learn how to make morning buns." Not so we can eat them all the time, but so we (I) can know what's goes into making a morning bun - both the time and the ingredients. Yes, my inner-dietitian is rooted deep inside my soul. I think about cooking/baking/making things that are unhealthy ever since reading one of Michael Pollen's books - I think it was In Defense of Food... or maybe Food Rules. Regardless, he thinks (and I agree) that it's okay to eat things like french fries and morning buns as long as you make them yourself...

Like not just putting frozen french fries in your home fryer or buying frozen chocolate croissants from Trader Joe's and baking them yourself. Okay, you get the point.

So, now that you understand the backstory of my morning bun adventure, onto the adventure.

Nate found this recipe. It's entitled Morning Buns for Slackers. There may be a shortcut, creating cheater croissant dough, but this recipe is not for slackers. Buying morning buns at a bakery is what slackers do.

So I started on Tuesday and let the dough rest until Wednesday.  Here's what it looked like on Wednesday afternoon, after rolling and folding four times: 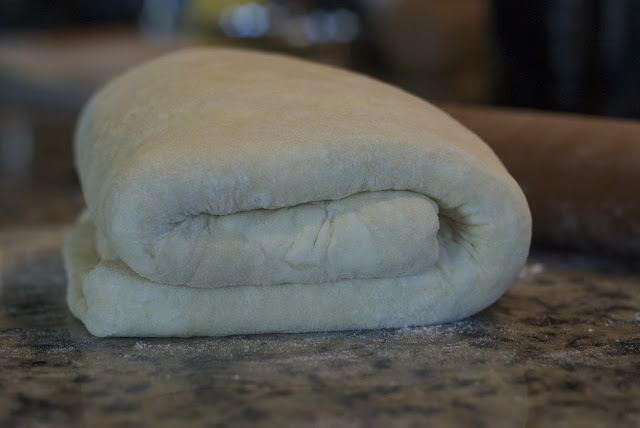 Even though there's yeast in the dough, I was surprised by how much it grew in the refrigerator that first night. Sorry you can't see that - I forgot to take before and after pictures. So then this folded dough went back into the refrigerator for about six hours, increasing even more in size. On Wednesday night, I  completed the next step - rolling it flat, adding tons of butter and sugar...and then more butter and more sugar, to get to this point: 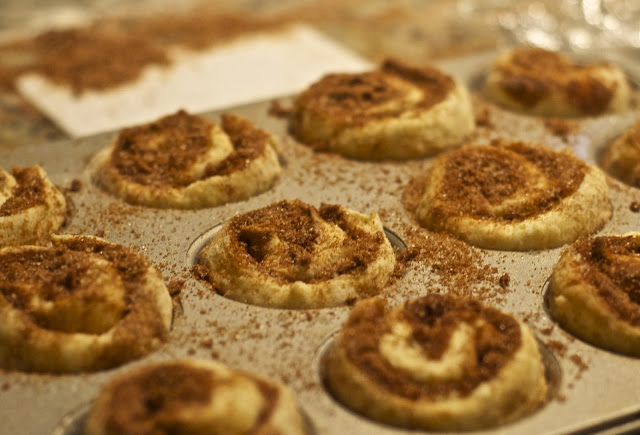 They needed to rise for 45 minutes in this state before baking for 20 minutes, so I covered them with plastic wrap and put them in the fridge, calculating at what time I would need to wake up in order to: 1) give a fresh bun to Nate before work, and 2) have buns ready to take to my newly founded Apple Moms group. Verdict: 7:15 am. Not bad, as Louisa usually wakes us up between 7:15 and 8 am anyways.

So the rest of the adventure is pretty straightforward:

The result? Very tasty, although I would have skipped the orange zest if I wasn't so trusting of pretty-blog recipes. It was a subtle orange taste, but I have affirmed that I prefer my cinnamon-flavored treats free of citrus notes. I was still able to enjoy them, especially after reflecting on the effort I put forward. Yum:

The only sad part of this adventure is that you can't just wake up one morning and say, "I feel like morning buns for breakfast" and then make them yourself. You have to decide two days early. But that, from a dietitian's perspective, is what makes it okay to eat things like morning buns. It's hard to eat them too often if they require that much forethought. Happy (occasional) indulging!
Posted by Alicia Bosscher at 6:39 PM