As I'm sure is the case for SO many people in the time of COVID, our summer travels plans changed a few times before we finally embarked on a family trip: a 10-day tour of Wisconsin. The stats: five people, a 35-foot RV, a list of 8-9 state parks to visit, and a lovely spreadsheet of activities created by my super-trip-planning husband. I had more cell phone coverage than I expected on the trip, so did a highlight reel on Facebook each day, but I also wanted to capture some memories here. So here goes!

Day 1: Peninsula State Park - we arrived around 4 p.m. and the kids have very fond memories of exploring on their own and their discovery of a small rock beach that they insisted on taking us to after dinner. The first night in the RV was fine. Nate and I had our own room with a queen bed and the kids rotated between a double fold-out couch and a single table/bed with their sleeping bags. 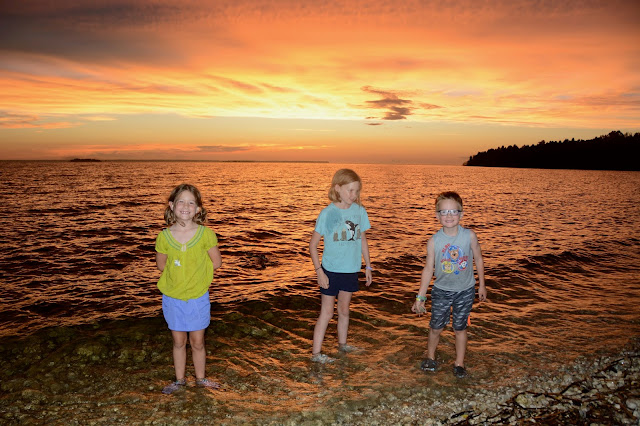 Day 2: We drove the RV about 20 minutes north to Newport State Park a biked some beautiful trails that were more "mountainy" than the gravel path we were expecting. The trail we took ended at two tiny little beaches that the kids could've played at for hours. However, we had to get back because our dear friends Seth & Laura and their kids (William, Joy, Finn and James) were driving up from Green Bay for a social distanced hello. I'm kicking myself for not getting any pictures of the seven kids together, but it was wonderful to be with them for a couple of hours. That evening after dinner, we walked over to the same rock beach from the night before and got a pretty great picture of the three kids. 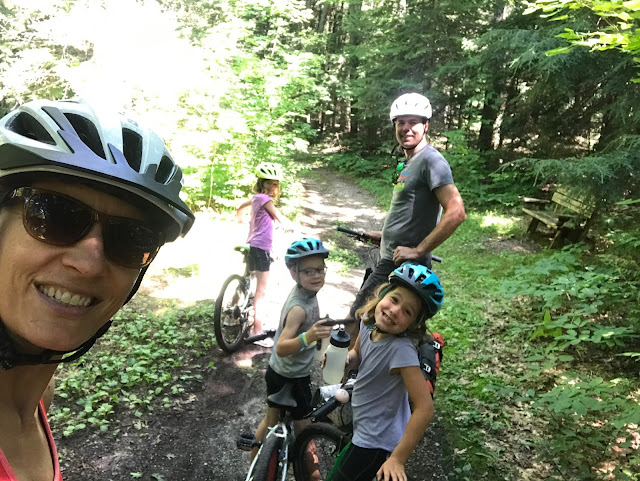 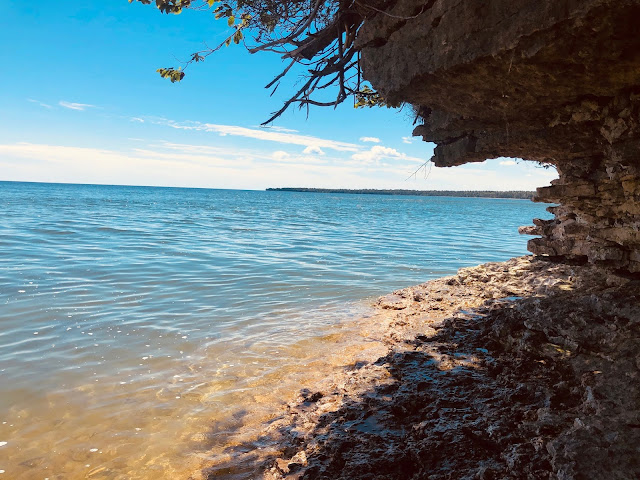 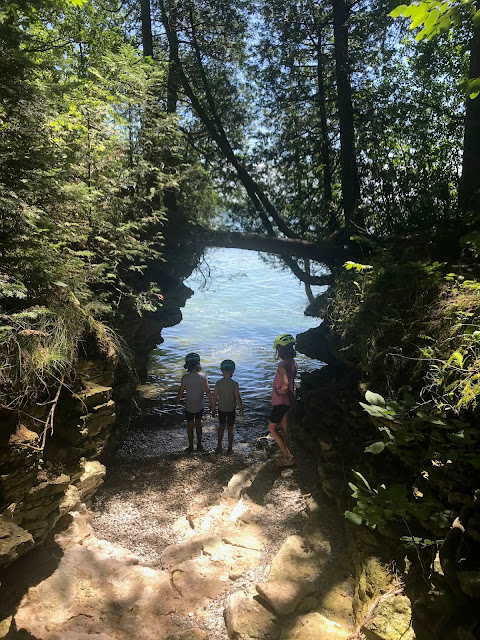 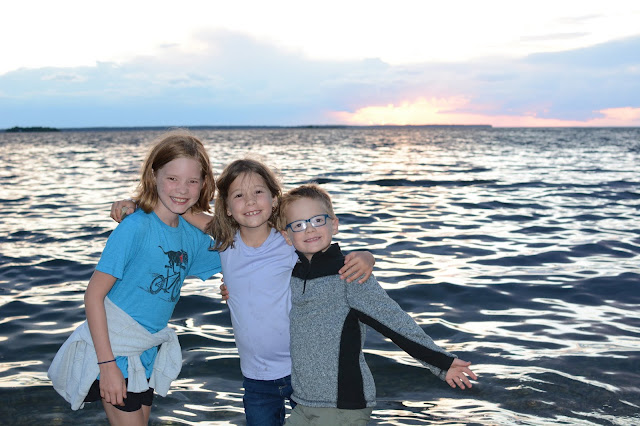 Day 3: Before leaving Peninsula State Park, the only park we would stay two nights, we hiked Eagle Trail. It was beautiful and not nearly as difficult as the sign at the trailhead warned. After our hike, we biked back to the camp sight and [in the RV] headed back down the peninsula, headed for Jake Lake. When Nate called to reserve a camp sight the week before, the women told him not to worry, they would definitely have sites available on a Tuesday night. When we arrived, they didn't and our cell coverage was spotty as we looked for other options nearby. I walked back into the park office to use their phone to call another county park and came back a hero - telling the kids that they did have a site for us after hearing that we only planned to stay for one night. That night, the kids watched Shrek 2 in the RV while Nate and I did a quick mountain bike loop nearby. 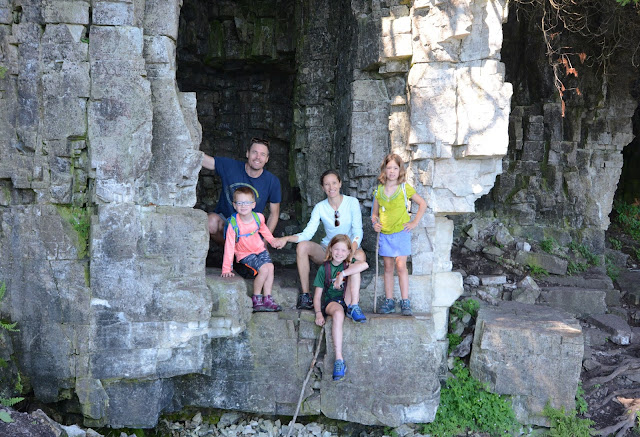 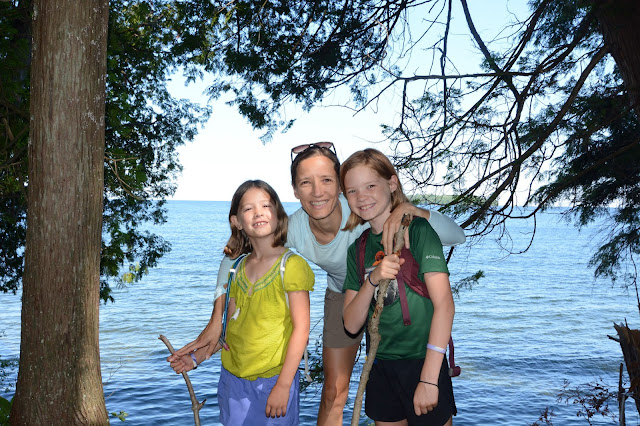 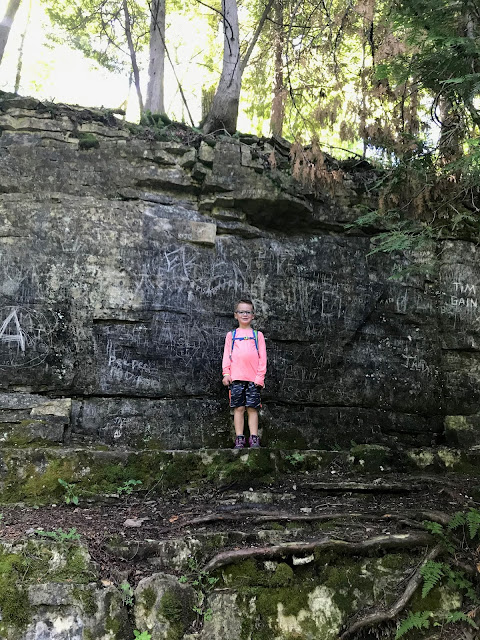 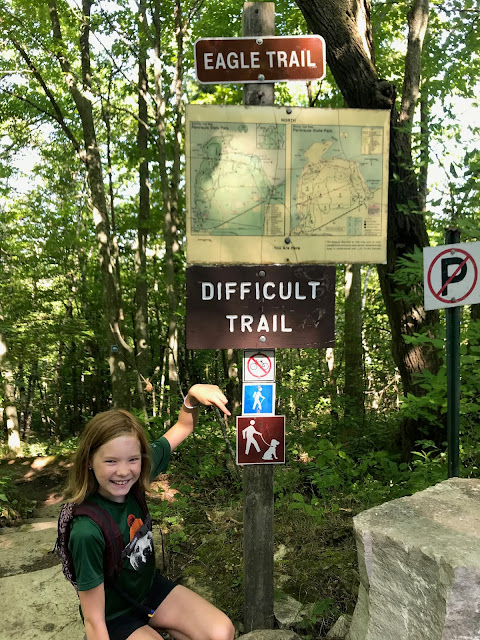 Day 4: We had a slow start Wednesday morning, complete with pancakes and a father-daughter mountain bike ride for Nate and Louisa while Peter and Cora biked around the camp site, begging us to stay longer. We had plans to get to Copper Falls State Park though, so got on the road. At one point during the drive, I saw a sign that we were 15 mile from Rhinelander, so I texted my Aunt Jeanne who has an amazing cabin on Lumen Lake. We stopped for watermelon, indigo dying, kombucha and a tour. The cabin that they built together maybe 20 years ago, is full of finished art (most of it their own) and ongoing art projects, and surrounded by flowers and vegetable gardens. It's a special place to me because one summer in college I lived there while doing a public health internship. Nate and the kids had never seen it though. After we said our farewells, the only major glitch in the trip occurred. We were detoured through The Chequamegon-Nicolet National Forest and got too close to the side of the dirt road, slipping into the soft soil ditch. The tires were definitely stuck and we definitely didn't have cell service. By some miracle, Nate got service about a mile down the road, so he spent at least 3 hours in that spot while the rest of us hung out in and out of the RV. Five hours after the incident, a tow truck pulled us out and we made our way to the parking lot of Walmart in Ashland for a night of urban-camping. 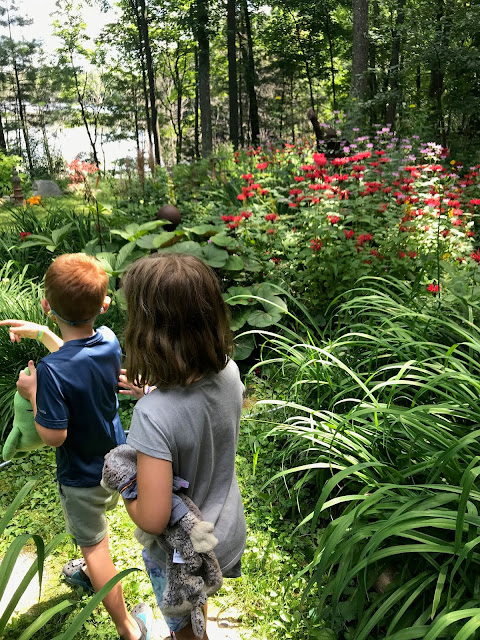 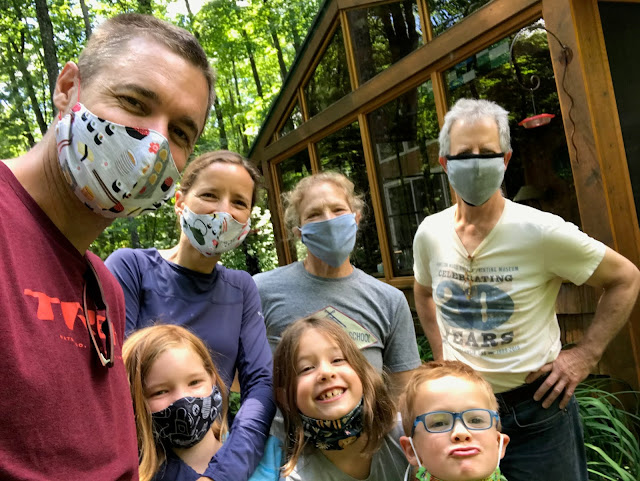 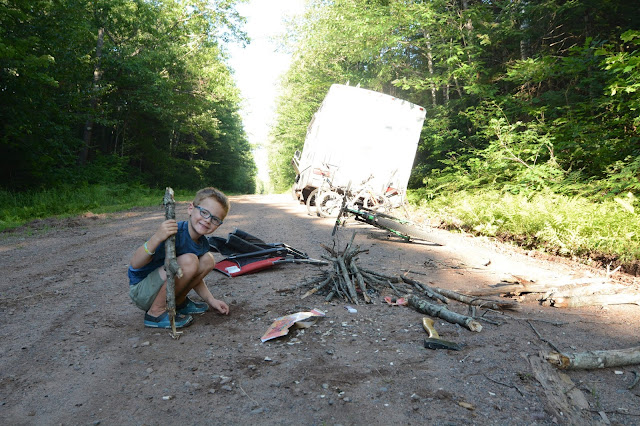 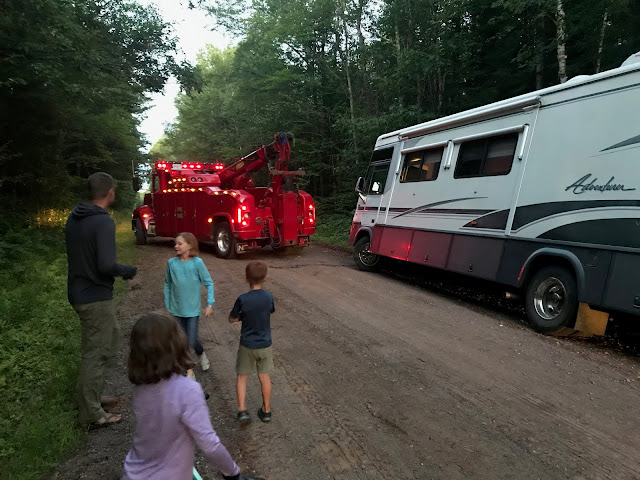 Day 5: From Ashland, we headed north again to catch our sailboat ride in the Apostle Islands. The weather was gorgeous, although the wind could have been better, but no dramamine was consumed throughout the 6 hour sailboat tour (or the entire trip for that matter)! It was just our family plus our captain, a 25 year-old sailing instructor and substitute teacher who did an amazing job engaging the kids. He taught them knots and let them help sail as much as they wanted. The water of Lake Superior is never warmer than 70, and usually much colder, but thanks to recent rain, the water temperature was tolerable (70 degrees) and everyone but me went swimming in a cave. 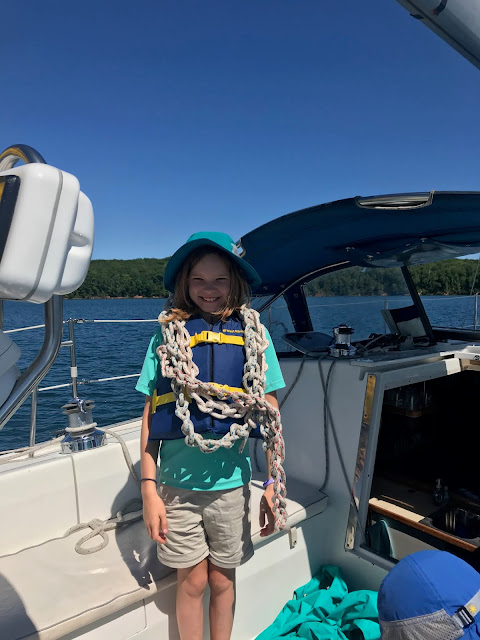 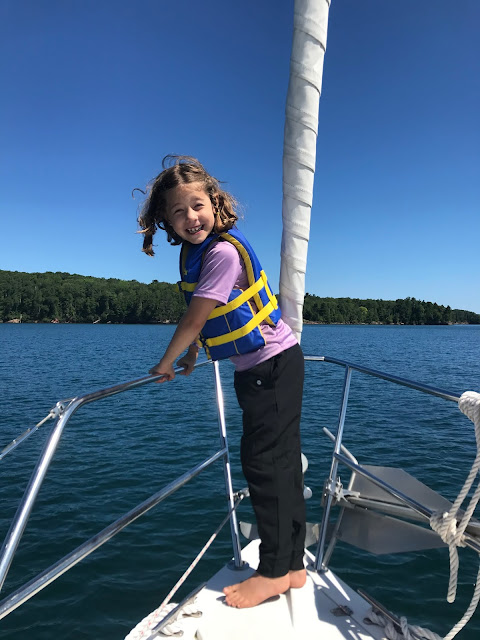 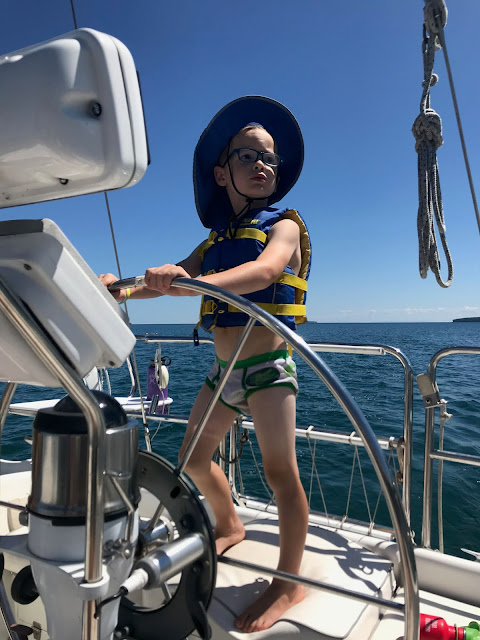 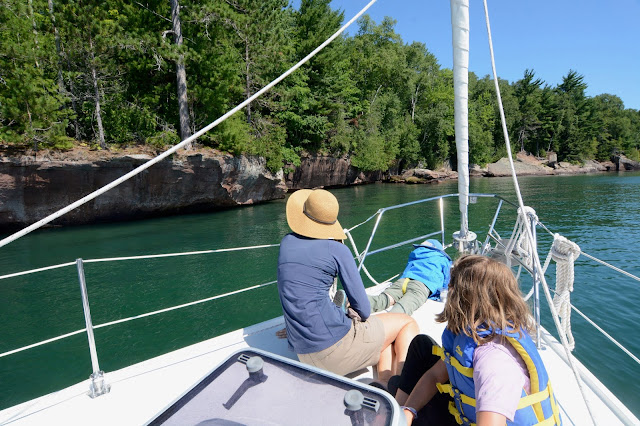 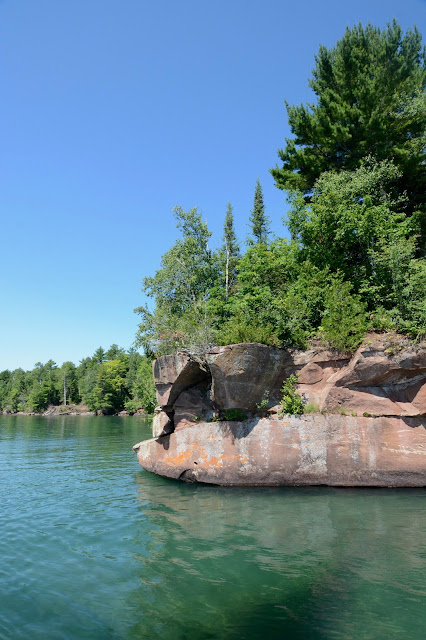 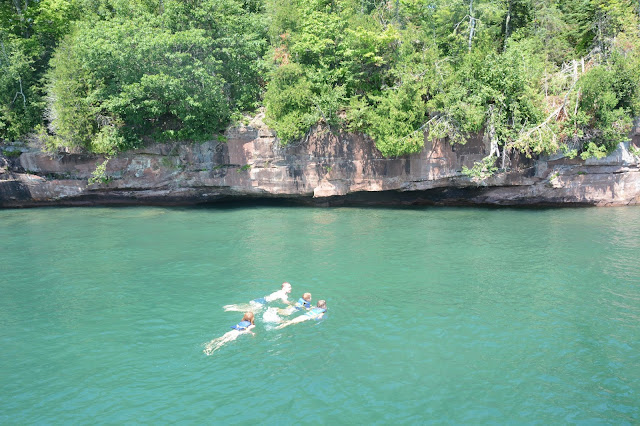 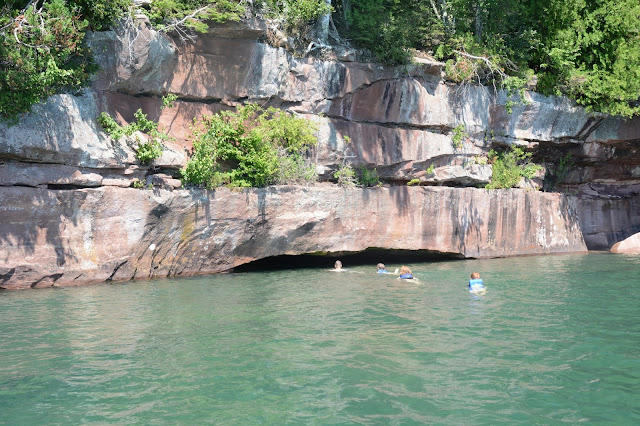 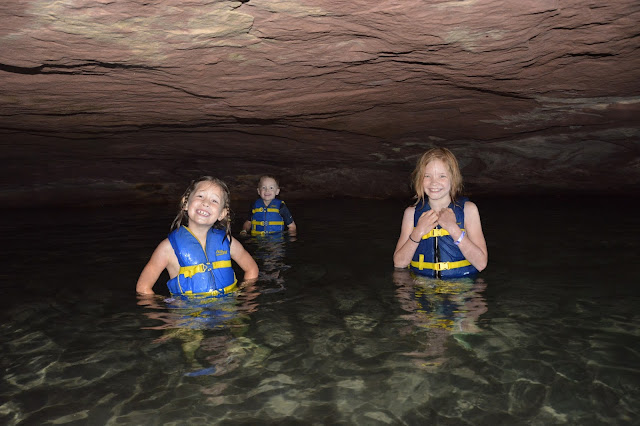 Whew. The trip didn't feel too long, but my plan to put all 10 days in one blog post sounds like too much for me and you, so let's make this a two-parter, shall we? Part two coming soon!
Posted by Alicia Bosscher at 9:52 PM