A friend of our neighbors' called this week, introducing himself as Sam, the board president of the Madison Trust for Historic Preservation, explaining that he has watched the work on our house over the past 1.5 years and thinks we should nominate ourselves for a renovation award. It seems to be more of a fundraiser (applying is free, but the award ceremony requires a ticket to attend), rather than an honor I would love to win, but I applied nonetheless. At the very least, I'm grateful for the motivation to reflect on our process and put together a few before and after pictures. Here is our project description, written for the application, along with a few before and after pictures, also submitted.


We purchased our home in July of 2015. Our realtor tried to convince us to look at houses that needed less work, but we really loved the neighborhood and felt that we were up for a complete renovation, so we went for it. Over the next year and a half, neighbors shared stories of the history of the house. It was last purchased as a fixer-upper in the 1970’s but was never actually fixed up. Ten dumpsters of hoarded “stuff” were discarded before we ever set foot in the house. We removed another 10 dumpsters worth in the demolition process.

We completed the majority of the renovation work ourselves, while hiring out a few of the larger jobs to local contractors.  Nate discovered a passion for construction and woodworking at West High School, and from day one, balanced his desire to do all the work himself with a full-time job as an engineer designing bikes at Trek.

It’s probably easier to say which parts of the house we didn’t replace. Like all major renovations, the to-do list got longer and longer the farther we went. We retained the footprint of the house, with the exception of the back deck, which we made smaller. All of the windows, except one intricate diamond shaped window in the attic landing, have been replaced. The wood floors needed some minor patching and repairs, but sanded out beautifully. The electrical work was all knob and tube and needed to be replaced, and the plumbing needed to be updated as well. So we decided as long as we were opening up all the walls, we would put in a modern HVAC system with central air. We made a drafty, old house airtight with spray foam on the interior and rigid foam on the exterior of the original shiplap sheathing. For many months we debated whether to repair and paint the original cedar siding, but in the end decided that it made more sense economically to replace it with LP Smartside.

We painstakingly removed, de-nailed and refinished all of the trim in the house.  We’ve re-installed some of it, but much of it is waiting patiently in the newly finished walk-up attic, ready to adorn a window or cover the ragged ends of the hardwood floors where they meet the walls. For a modern family of 5, it made more sense to have two full bathrooms upstairs and a half bath downstairs, so we transformed the upstairs study into a bathroom. We also shortened the upstairs hallway, creating a master bedroom/bathroom. The house had a second staircase that was charming and historic, but by removing it we made room for the half bath downstairs, a closet in the playroom, a main floor laundry room, and a pantry. The basement remains unfinished and is a wonderful workshop for the general contractor, my husband.

As you can see from the pictures of the kitchen, we removed the wall between the living room and kitchen. This required removing the chimney that ran from the basement boiler through the roof, brick by brick. The house lacked an original fireplace, so we added a gas fireplace that vents directly out the side of the house.

The main things that still need to be done include a railing in the attic, lots of trim, fireplace mantle/tile, kitchen backsplash tile, cabinet doors and fronts, siding on the new 2 car garage, and finishing touches on the landscaping. All in all, it’s been a fun project and although we drained our savings, we have no regrets! 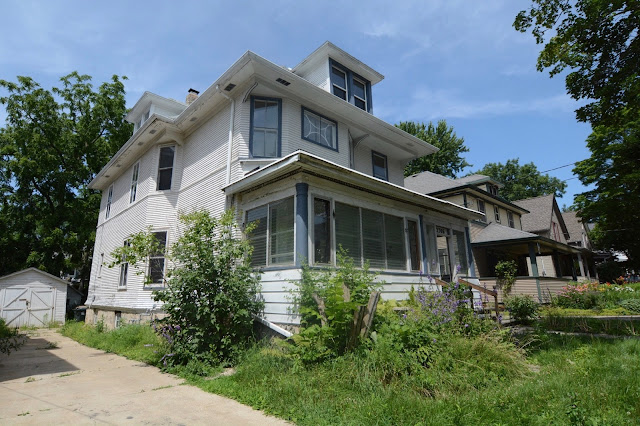 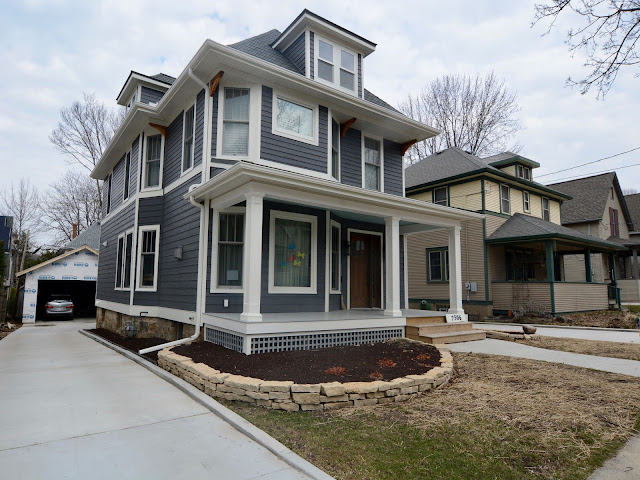 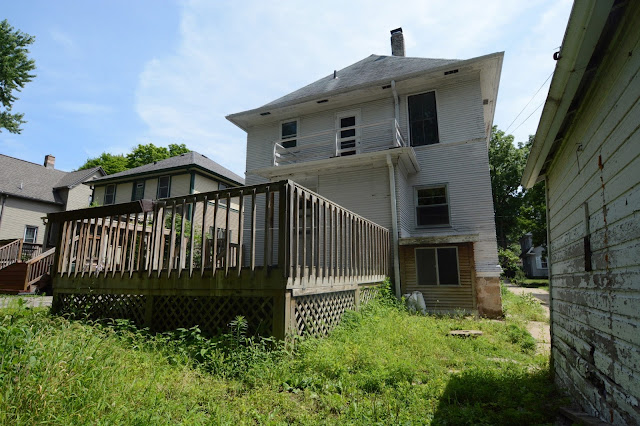 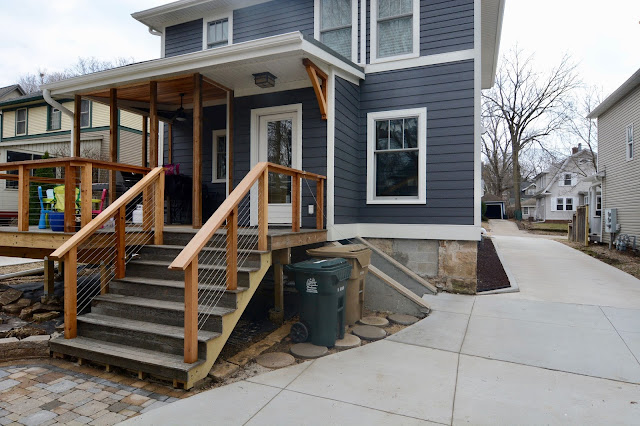 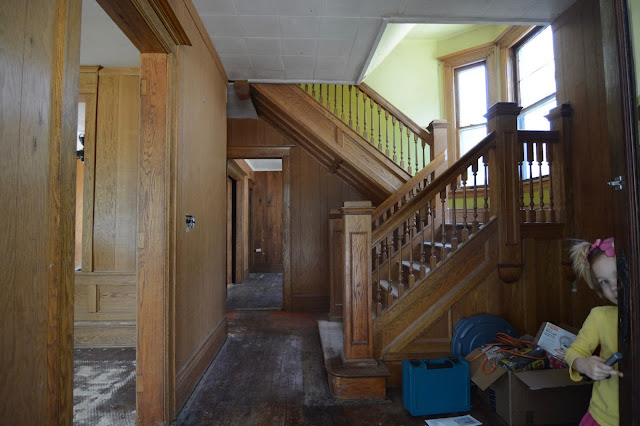 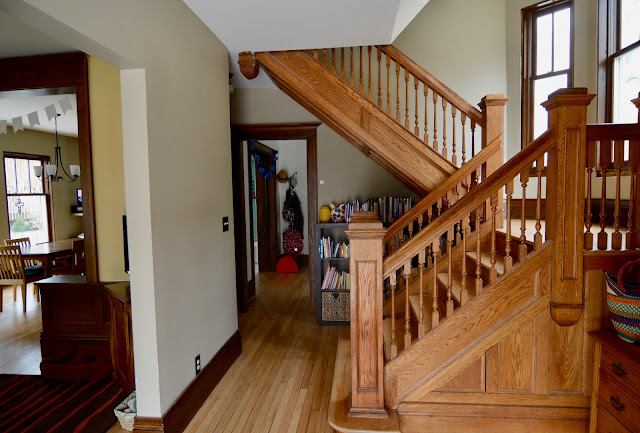 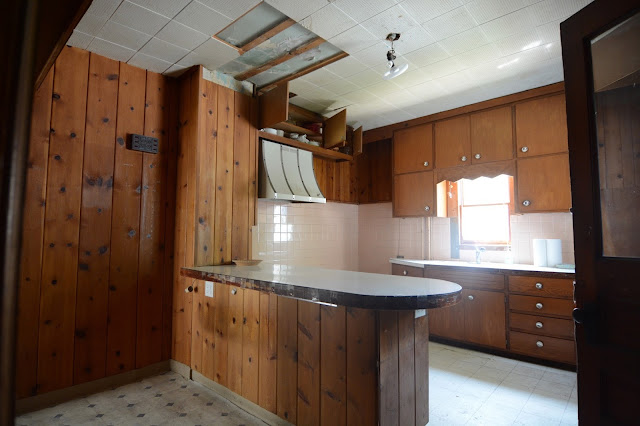 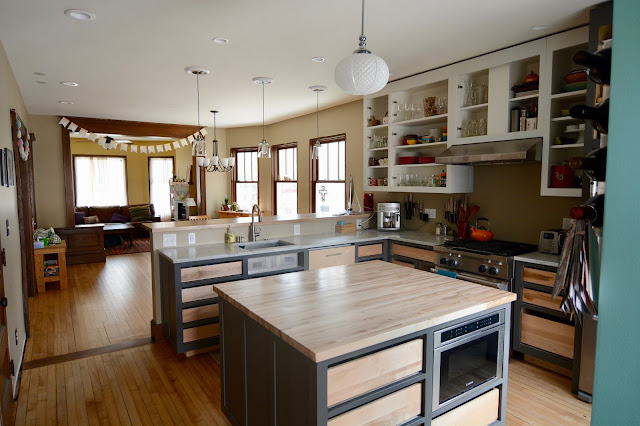 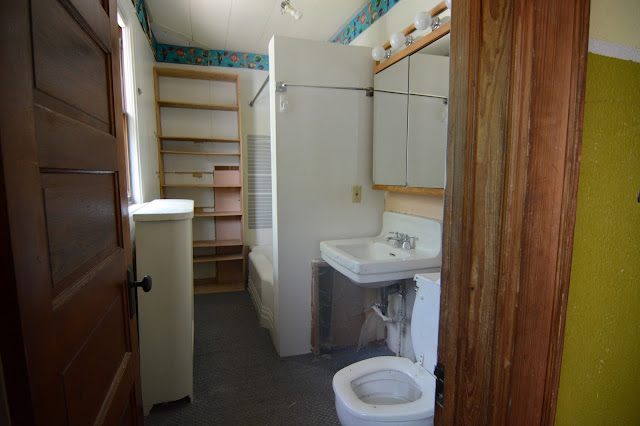 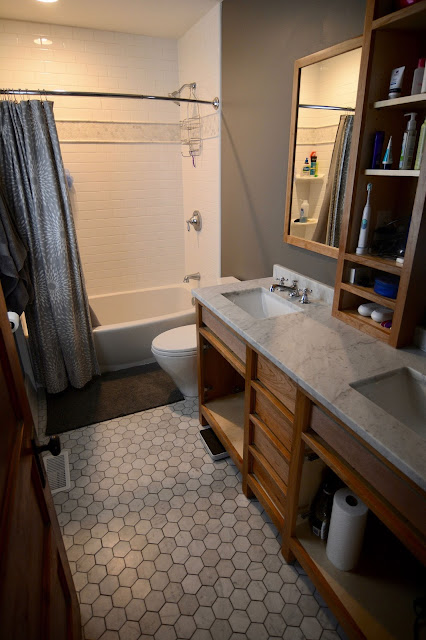 Posted by Alicia Bosscher at 10:17 AM