You've no doubt heard the news via phone call, text, Facebook or email, but our blog wouldn't be complete without a nice long post about little Peter!

On Wednesday, February 11 (8 days past my official due date), we all woke up, a bit disappointed that there wasn't any baby action in the night, but with a "distract and enjoy" plan of going to the beach after naps. The beach was lovely and although there wasn't a long shore line for me to "walk the baby out," I did walk a bit, feeling some contractions, but nothing intense or regular.

We had dinner and then drove the windy, 35-minute drive back to Campbell just in time for the girls' bedtime. At 8:30, the girls were in bed and I told Nate and my mom that I feel a bit different tonight, although I'm not making any promises that this is it. I turned on an episode of Call the Midwife, a great BBC drama about midwives in a poor part of London in the 1950's. Over the next hour or so, my contractions quickly went from 9 minutes to 3-4 minutes apart. They were also more of the "brace yourself and breath" type contractions, so I was pretty sure it was time. I texted my doula, Tracie and Nate put our stuff in the car. Around 10:30, we were back on highway 17, headed back to the beach.

Two days earlier, I was 3.5 centimeters dilated, so I had great hope that when we finally checked into the hospital, things would move faster than Cora and Louisa's births. Tracie arrived shortly after we did and immediately started massaging my back during contractions. My acceptance of her hands-on approach helped Nate to immediately get involved, either supporting my body weight as I tried to find the best position for each contraction or applying pressure to my lower back. During my other labors, I don't think my contractions ever got closer than 4 minutes apart, whereas this time they seemed to be about 60 seconds apart.

Shortly after settling into our room, I was six centimeters, which was music to my ears. Things moved so quickly that there was no need to talk about pitocin, and around 1:15 am, I begged for drugs. You don't really want drugs, do you? Nate asked. Yes, I do, I mean, no I don't really, but I do! was my answer. My midwife, Timmi, who happened to be on-call for births only on Wednesdays, said I have an idea. Let's do an exam to check your progress. She announced that I was 9.5 cm dilated, then paused, and said okay, you're complete!

WHAT?! Crazy. Amazing! Hallelujah! Too late for drugs. Crazy fast labor. I was super-excited. The pushing wasn't easy, and I was not quiet about it, but it only lasted about 15-20 minutes. I couldn't stop saying oh baby, baby, whoa, whoa as I held our little (big, actually) slimy baby. Everyone else was apparently very concerned about my blood loss, but I couldn't care less...it was over and I wasn't totally exhausted. In-fact, I felt something of a runner's high from the shock of how quick and intense it all was. 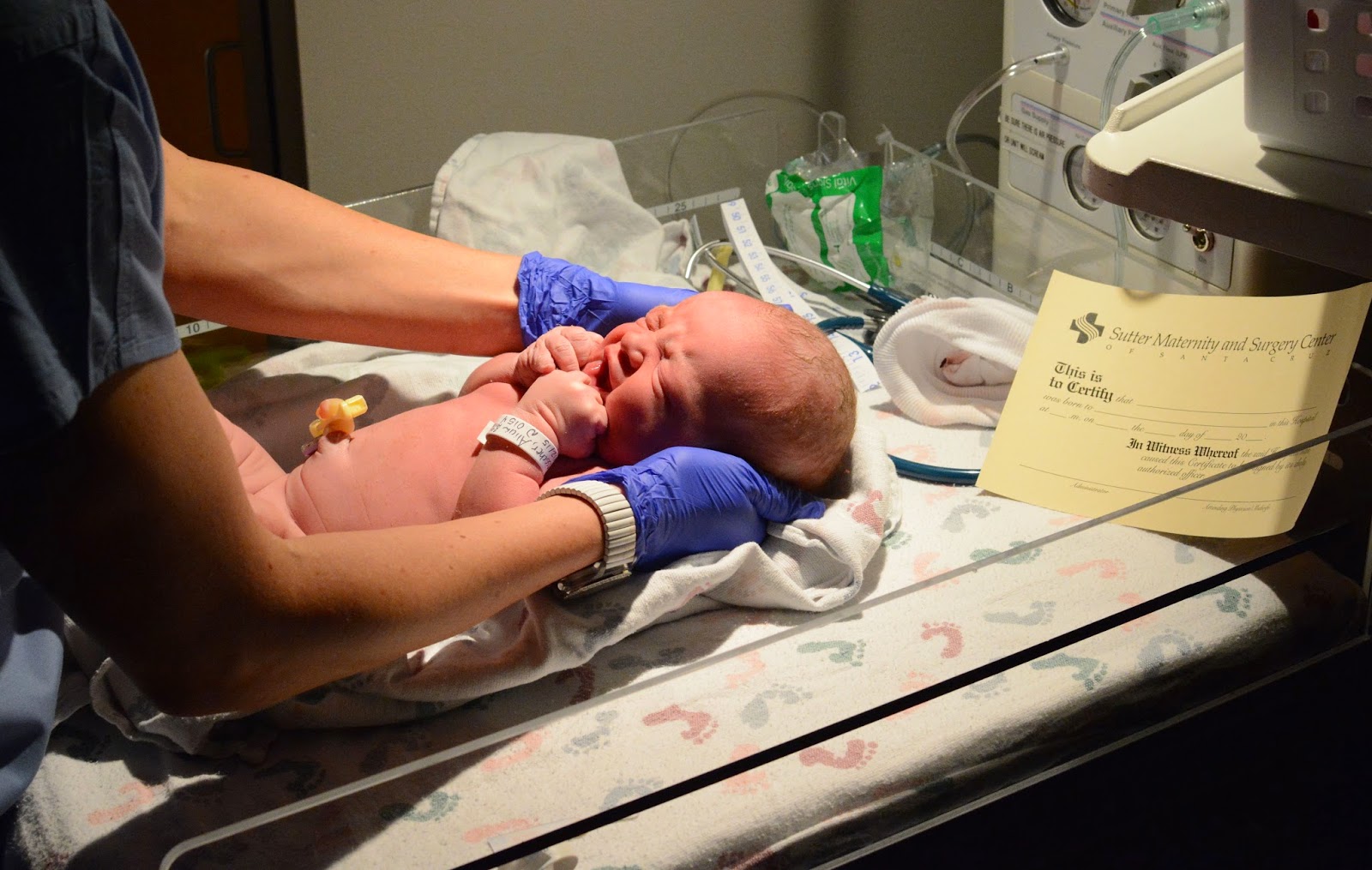 Peter spent the first two hours of his life on me, teaching himself how to nurse. It was a beautiful distraction from the aggressive pushing the nurses were doing as they were trying to stop my bleeding. Removing some clots and giving me pitocin got everything under control and we were left in peace around 4:15 am.

My mom brought Louisa and Cora around 11 am the next day. Later Louisa told me, Mom, on the way to the hospital, I was so excited to see Peter, I could hardly stand it. I smiled, then she asked, what does 'stand it' mean? Oh Lou, I love listening to you talk.

Both Louisa and Cora are totally in love with him and whenever they see him, they touch his head and call him by name; Baby Peter according to Lou and Didi (i.e. baby) to Cora. I think he looks a lot like Louisa did when she was born and my guess is that he'll have light brown hair, possibly with some red. Nate's hoping for blond hair so we have one of each. 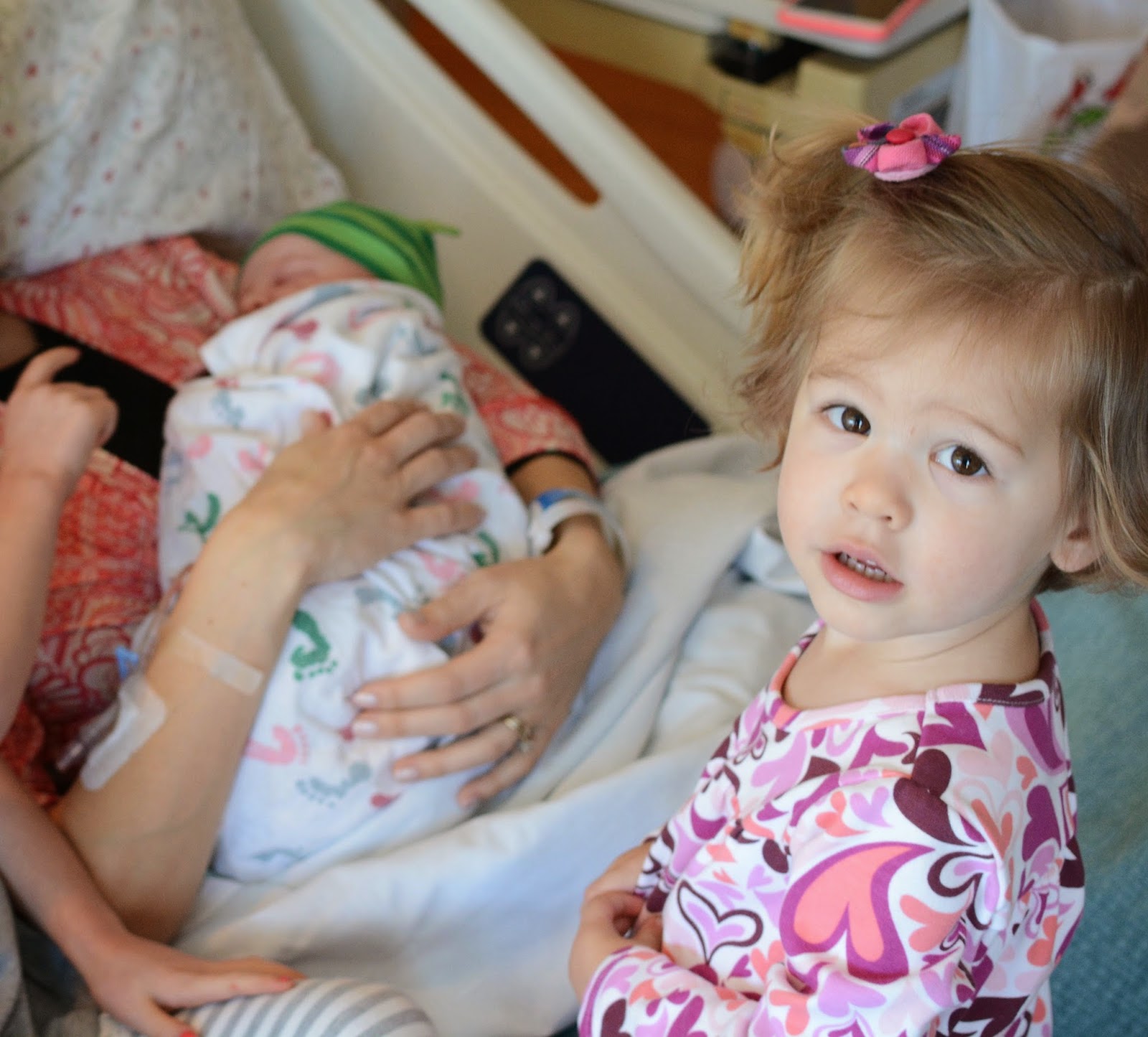 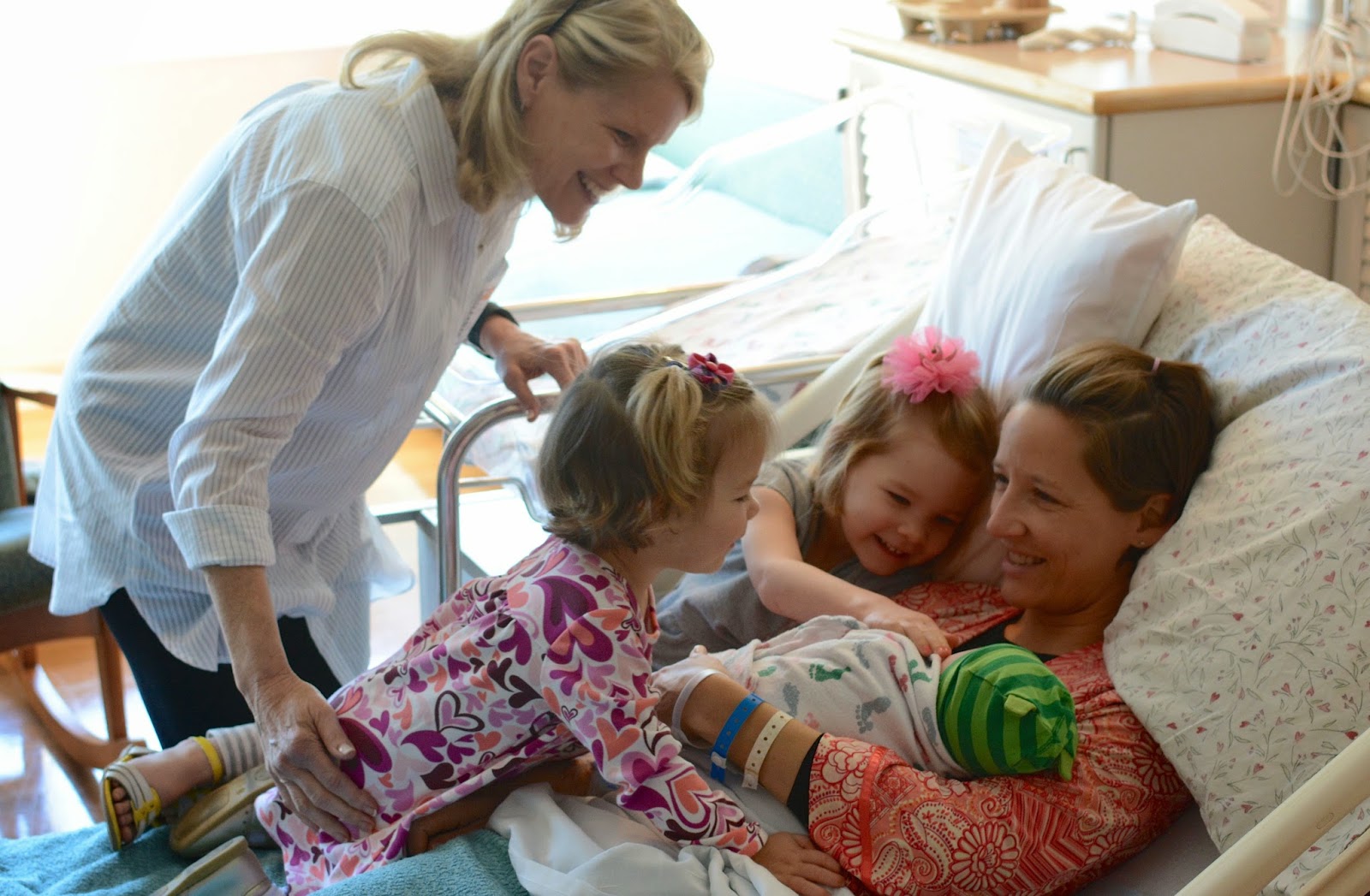 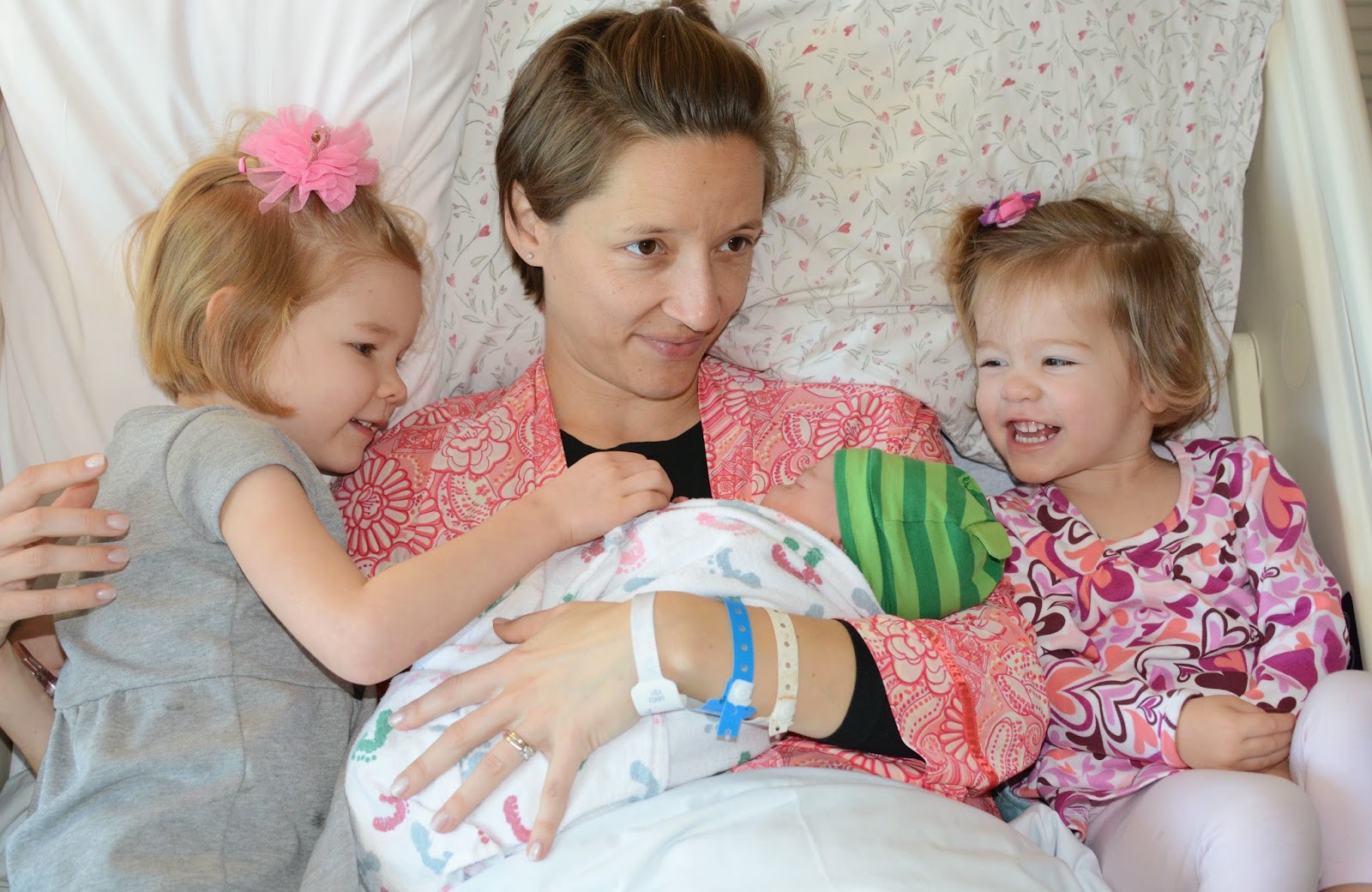 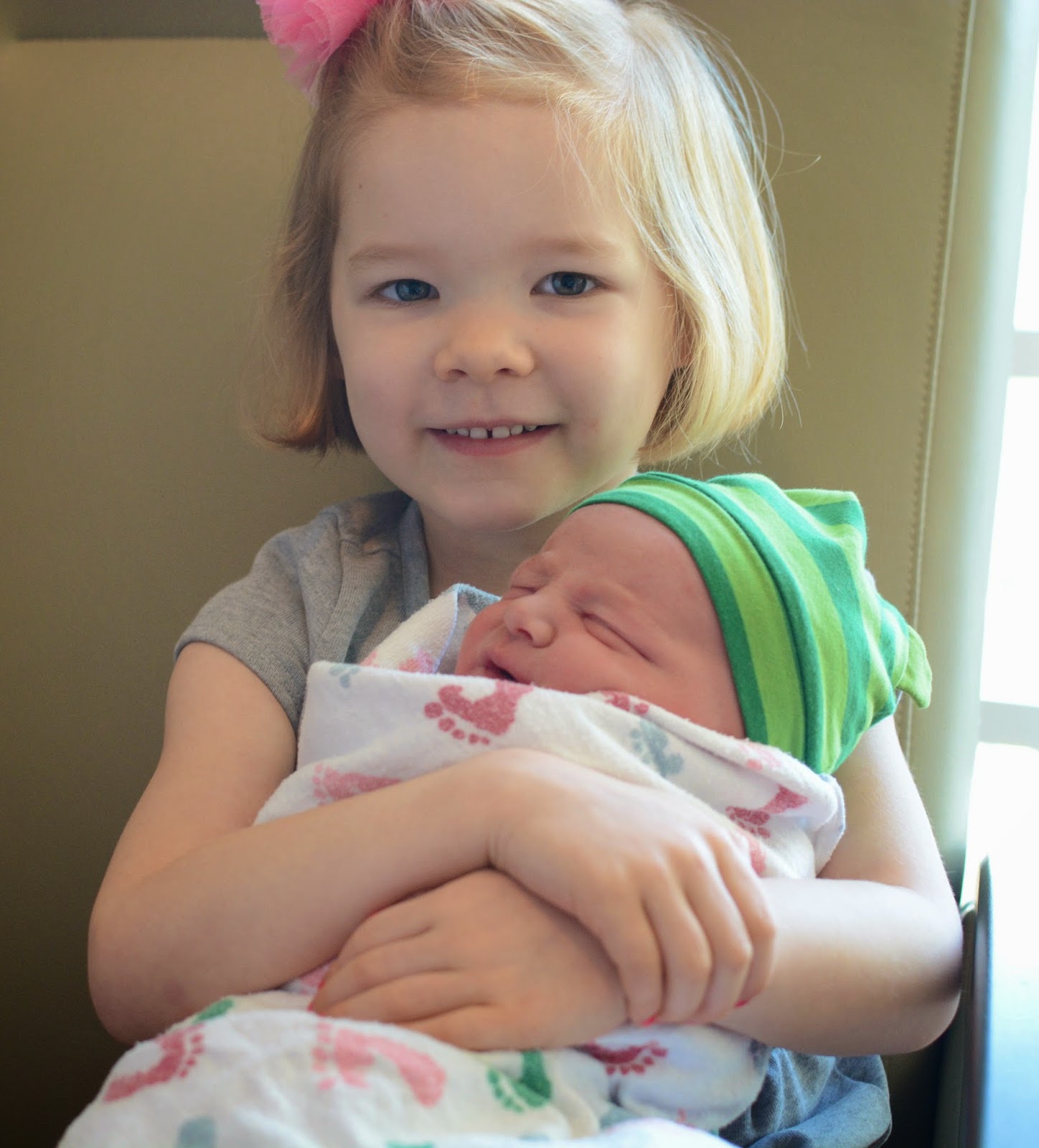 We took advantage of every last minute we were allowed to stay at the hospital. No, the beds were not nearly as comfortable as our bed, but room service, cable t.v. and really sweet nurses made for a pretty relaxing stay. Plus, they were closely monitoring my blood pressure, which was totally normal throughout my entire pregnancy until after delivery. The same thing happened with Cora and after a week or so, it was fine again. At my last check on Wednesday, it was down to 130/87, which is still high, but much better than the 150s/90s they were seeing in the hospital. 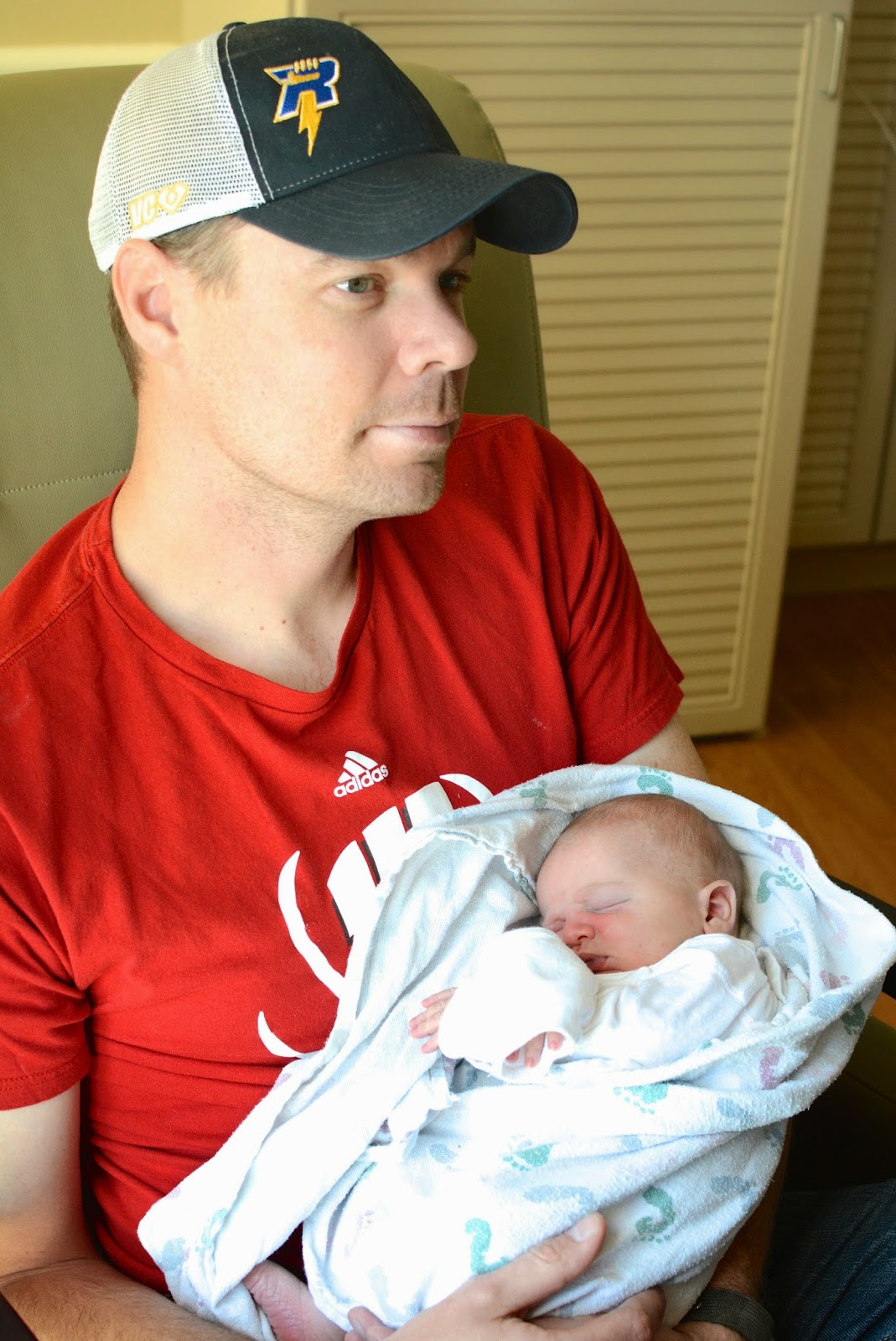 We came home from the hospital on Valentine's Day and my mom prepared a sweet little party for Peter's "zero" birthday. The last three pictures perfectly describe Peter's first week at home. I really did forget how much newborns sleep and love to be held. The last two pictures were from his afternoon sun time today...one little way to encourage more night-time sleeping. The first few nights he was  waking to nurse every 1-2 hours. Whoa. Exhausting. But last night was a lot better and we're hopeful that he'll follow in his sisters' footsteps and be a good sleeper. Either way though, we're thrilled you're finally here little mister! 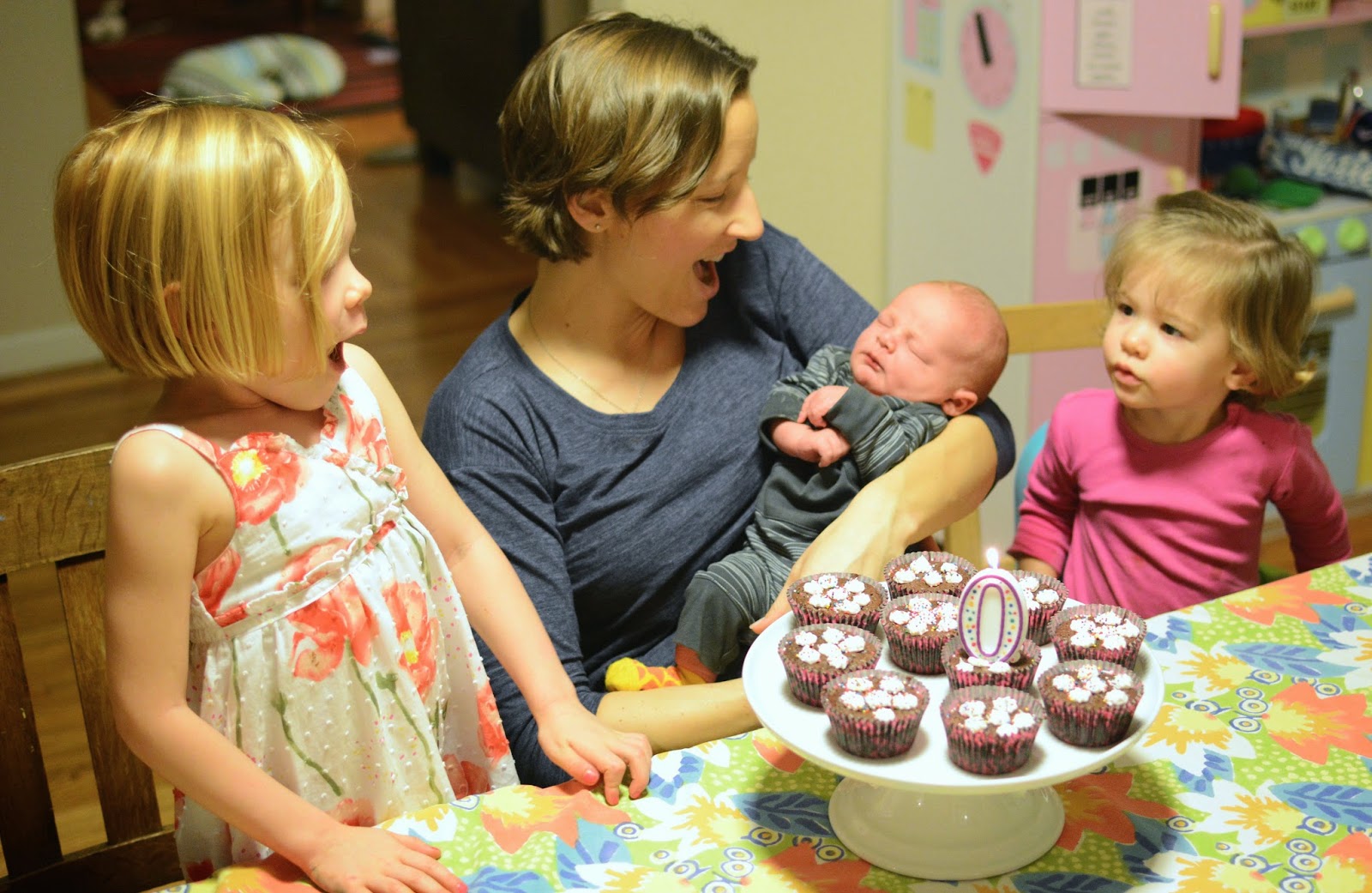 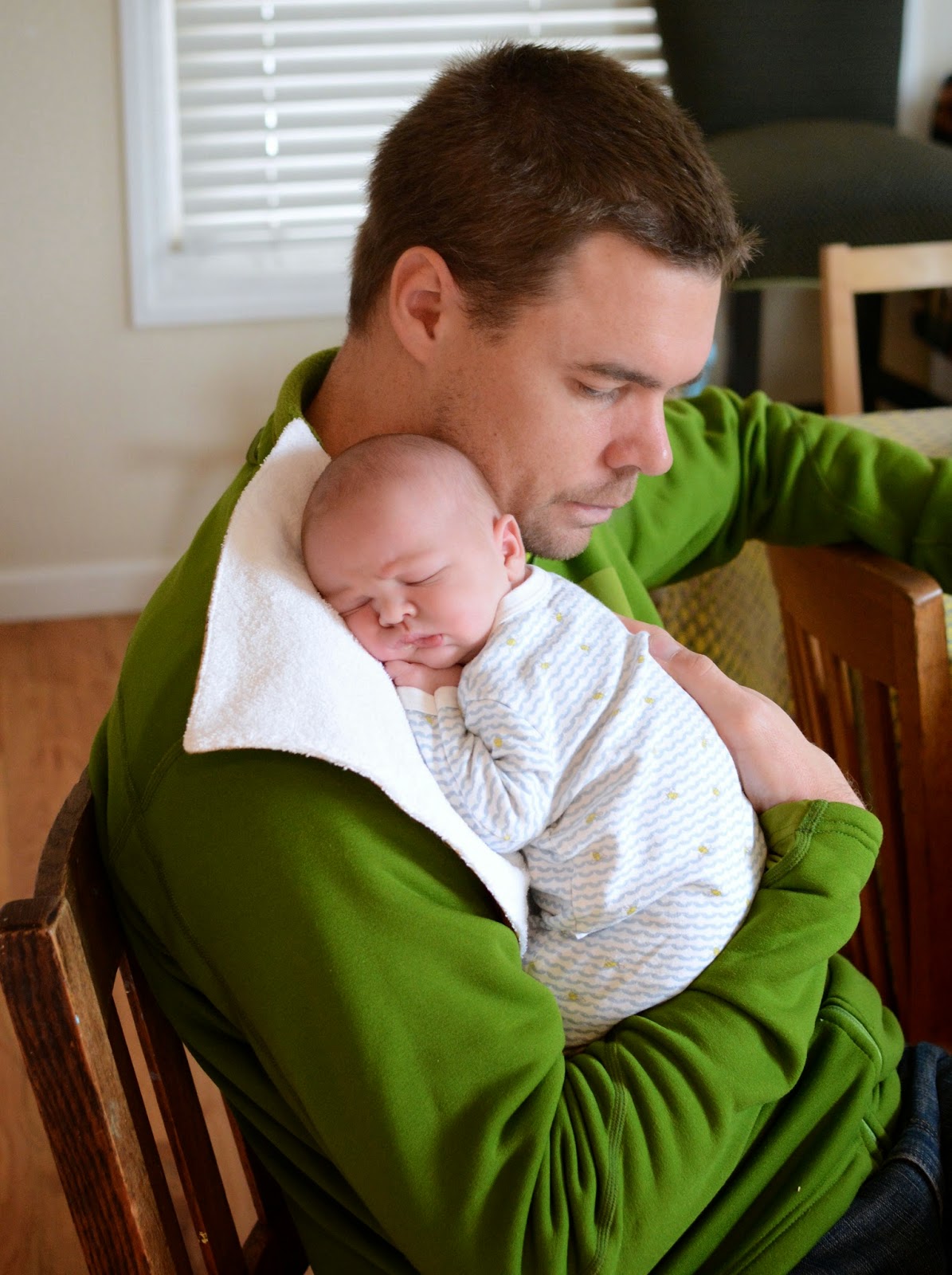 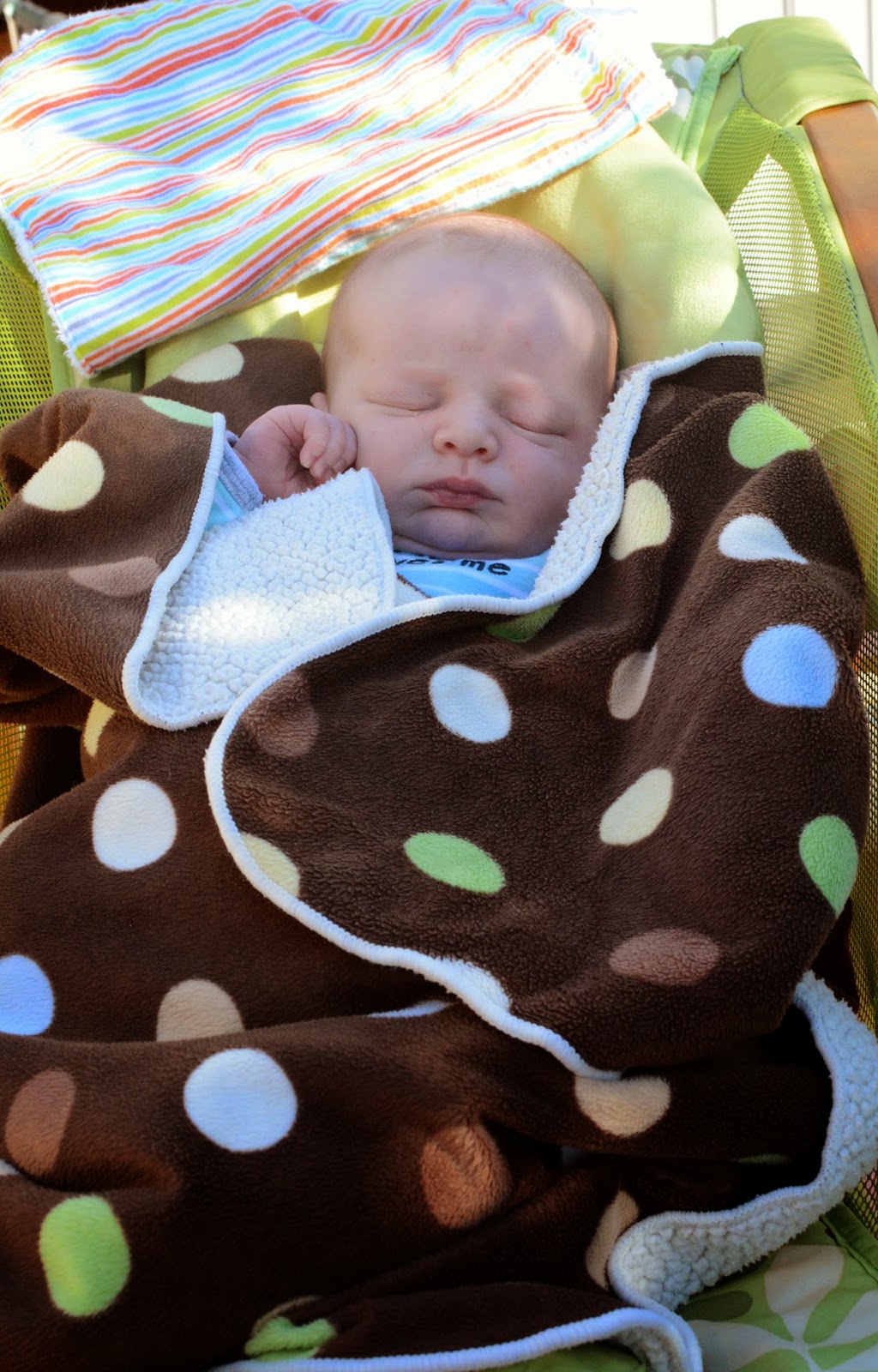 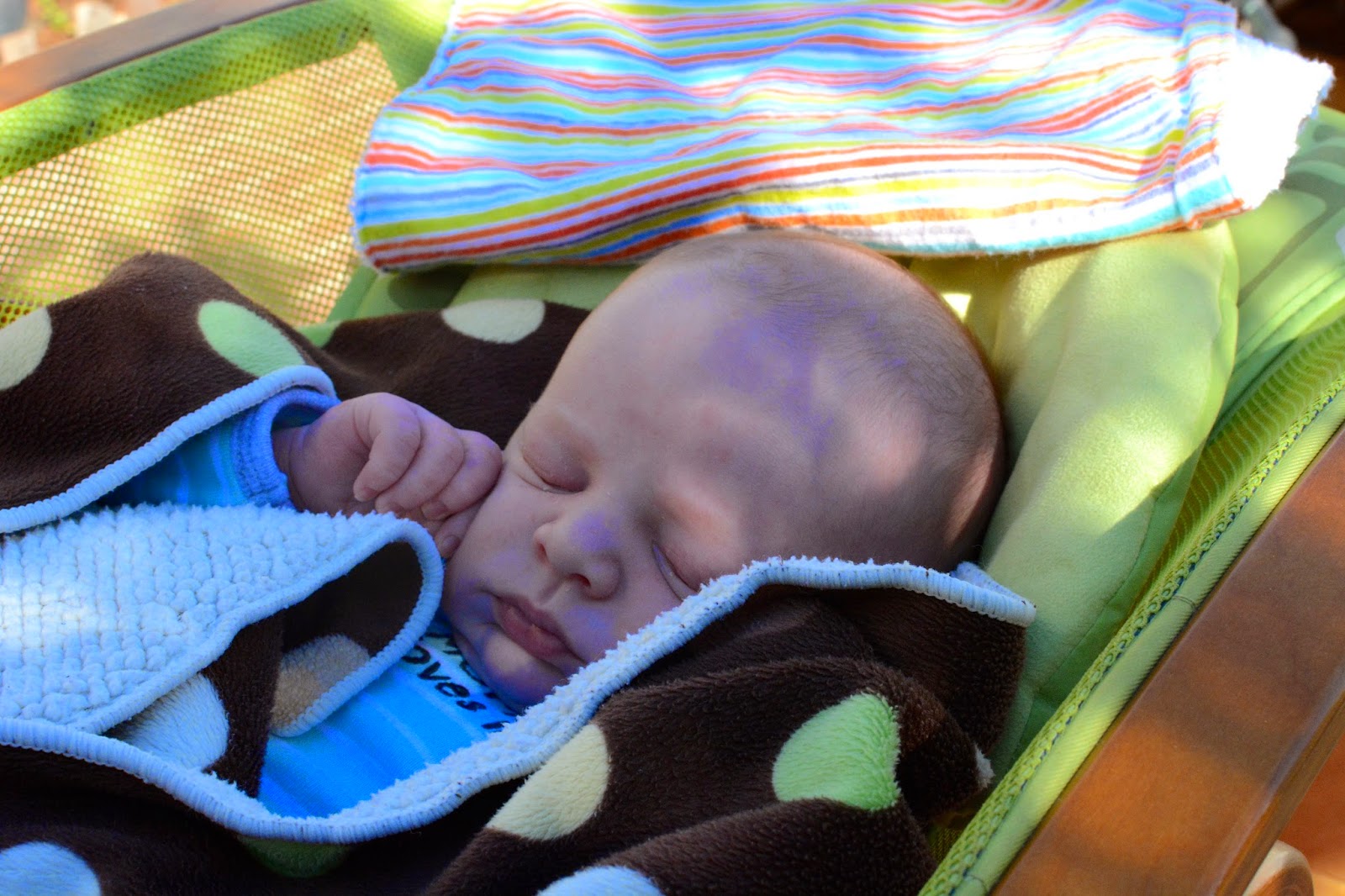