Unfortunately this follow-up to my last email is not a whole lot better. In fact, it might be worse...but don't worry - I am taking it all in stride by telling myself, "It's Africa!"

So last I wrote, the Land Rover had been jumped, I drove around charging the battery, went to bed, and woke up the next morning to find that it was dead again. The update is that I now owe Sarah and Dan's friend Doug 50 kilos of steak (its all he eats) for all the help he has offered over the past couple days. He came over today, started the car, and then led me to Ssanga's Land Rover fix-it garage. This was just a couple of hours ago, so please pray that the diagnosis is not too costly. We're hoping it just needs a new battery.

The humorous part of this whole saga is the way the Ugandan guard looked at me when I said that no, in-fact, we do not need your friend King to come over and jump the car and drive it to the garage because I - a white woman - am going to drive it there myself. I guess I can't blame him - he was just looking to capitalize on this economic opportunity.

I had to be pretty aggressive to follow closely behind Doug as we drove to the garage. In the end it was quite exhilarating and empowering for me!

Oh - one more bit of humor. Nate asked the eMi team to pray for my safety on the roads while he and the team were away this week. The next morning he read my text message saying, "the car battery is dead again" He and the eMi team liked God's answer to their prayer.

Okay - a little bit more about something other than broken down cars... 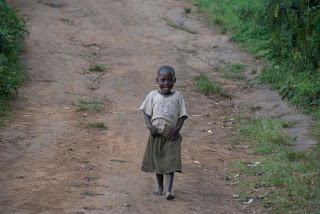 Today I was walking with 2 Ugandan colleagues down a red dirt road to reach a clinic. Anyone who knows anyone who has every traveled to African knows that the children love to run after white people yelling, "mzungu!" They often say "bye mzumgu!" A friend of mine asked a Ugandan why they say "bye" instead of "hello." The reason she got is, "well, you are always leaving - you never stay." But today some children said something much more complicated to me in Luganda. I asked my colleagues what they said and Joel said, "Bye Mzungu! When you return, bring us some sweets!" Then later an older child said to me, "Mzungu, will you be my sponsor?" So African children really do feel the effects of these child sponsorship programs we are all reluctant to give to!

Its Friday! Enjoy your weekend.
Love,
Alicia
Posted by Alicia Bosscher at 10:10 AM