There have been two tough decisions so far in our house renovation: the exterior color and the countertop material. The siding color decision has been made (in that we've ordered samples, not that I can't change my mind...) and the other decision (marble versus granite) has not been made and will receive individual attention in it's own blog post, coming soon.

As for the exterior decision, I knew I wanted darker grey and of course figured out right away that "darker grey" is not a final decision. There are so many choices still - brown-grey, green-grey, blue-grey. Flipping through the color deck, Jeanne helped me narrow things down to these:

Actually, the truth is that #3, Peppercorn, was not in the original top 4. We started with four choices and two were quickly eliminated for being too light. So from there I had it narrowed down to Westchester Grey and Gauntlet Grey. Then I read this post and in addition to feeling relieved that I was not the only one struggling with my decision, it helped me decide that Westchester Grey was the one...or so I thought. For some reason I still doubted that decision and after flipping through the paint deck late one night, decided to add Peppercorn to the mix. It looks so black compared to the others, but by that point I had experienced enough wow - it's amazing how different that looks when you paint it out moments, that I decided to give it a shot.

So I texted some friends/family this photo to solicit opinions: 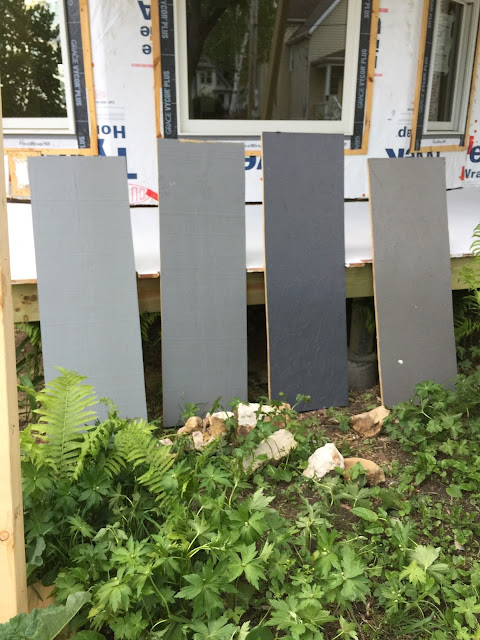 It was a fun way to connect with people and while there were a few outliers, the majority picked either Westchester Grey (#2) or Peppercorn (#3). By the way, I think this has been one of the toughest decisions for me because Nate did not have a strong opinion - - he didn't really see a difference between the various grays.

I asked Nate's opinion once I had it narrowed down to these two. His answer? He had a slight preference for Westchester Grey, but didn't dislike peppercorn. My neighbor said "Go bold! Choose peppercorn."  I also had a few friends who encouraged me to go darker. That was my gut feeling too, so that's that! Peppercorn siding (material choice: LP Smartside) with pearly white trim.

I'm really excited about it. We'll have to wait until fall for the siding, but that's fine with me. We've had a Tyvek covered house since Christmas, so what's another couple of months?
Posted by Alicia Bosscher at 1:42 PM