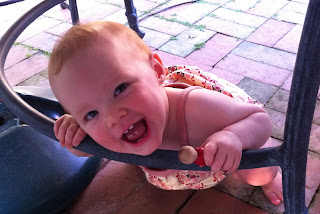 I can't say that I've frequently used the word "ham" to describe a person or a child as often as I have lately.  As Louisa's personality is starting to show, that is one the words that most easily comes to mind.  She can be so silly which is so much fun!  This picture was taken on my parent's patio in Washington DC, after Louisa crawled over, head first, the bar she is holding onto.  Louisa and I were staying with my parents earlier this week - I was attending the Academy of Nutrition and Dietetics Public Policy Workshop and Lou was spending her days being silly with Belle Mare (also known as Grandma Terry).
Posted by Alicia Bosscher at 7:50 AM