Even though strangers can't tell I'm pregnant yet, we took our first belly profile picture last week! In the picture I'm 13 weeks along. It kind of just looks like I'm sticking my belly out, doesn't it? Nate has thoughts of taking a picture of me every single day in the same location, wearing the same outfit so that he can make a flip book. I'm thinking we're gonna miss a few days. 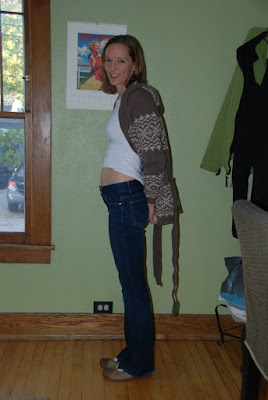 Nate is feeling more like a father these days driving around his new 2001 Prius. In anticipation of rain, snow and a more chaotic life, we gave in and became a 2-car family. The good news is that it was Nate's dad's car and still sports a bumper sticker that reads, "Ultimate Dad." I do think he'll be the ultimate dad for our little bitty baby, but its more about ultimate frisbee than it is about bragging about his fathering skills. It's fitting because as the baby grows into an ultimate frisbee player, Nate is taking off for Club Nationals this week. His team is thrilled to be going again this year! 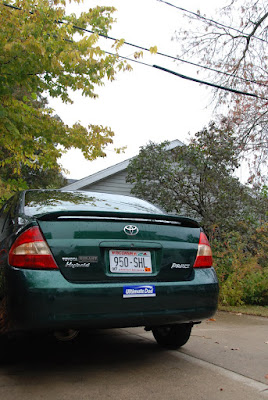 Posted by Alicia Bosscher at 10:20 PM